Often considered one of the North American League's great statesmen, Sir Alfred Laurier was instrumental in creation of the modern NAL. In particular, he was renowned for reconciling different cultural points of view into a mutually-agreed whole. "I have had before me as a pillar of fire," he said, "a policy of true Americanism, of moderation, of reconciliation." Amid all the different cultural/ethnic groups that made up and still make the NAL he seemed able to win the most trust across the broadest spectrum. Most historians agree he achieved this with a carefully nurtured reputation of personal integrity and politeness coupled with extraordinary cunning.

First elected to Parliament in 1875, Laurier was a Delegate and then a Senator from his home province. He was a natural leader who by the turn of the century was Whip of his Party. He was also chosen as NAL Ambassador to France, an act GM Tomos Armstrong Kuster thought might take the increasingly popular Laurier out of the limelight. It had the opposite effect, with several nations evincing considerable respect for the man and his accomplishments in forging stronger ties between the FK and France. His knighthood in 1909 by King Albert only brought all this more out into the open. In 1911, during an election generally viewed as a referendum on Kuster's adminstration, the differences between the two men were much touted: One of German stock, the other French. One a soldier, the other a barrister and diplomat. One Protestant and the other Catholic. Laurier was elected in a landslide. 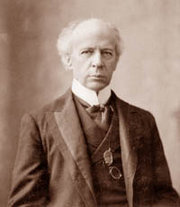 But he was not without his detractors. A firm believer in the separation of church and state, certain Catholic groups demonized him. In his native Alba Nuadh, some schoolchildren in Catholic schools were ordered by the Bishops to kneel and beg God that their parents not be damned should they have the temerity to vote for Laurier. It should be pointed out that Kuster's wife, later widow, never ceased in her character assassination of the man. She wrote he "...has rather less honor than most rodents."

Laurier died quite suddenly in office, during what should have been routine dental surgery, bleeding to death following the removal of a molar. It is one of the unanswerable "What Ifs" of history concerning his possible actions in the First Great War which was on the horizon when he died. Certainly, he saw the dangers of a full-scale war between the major European Powers and was not unwavering in any NAL duty to take part in such a conflict. Yet many also credit his work as a diplomat for insuring that the FK would ultimately enter the fight to defend France.

He was survived by his wife Zoe and their five children--Anne, Sylvie, Richard, Robert and Jean.

The Laurier Monument in Philadelphia is one of the most visited in the League.

He is the namesake of Université Alfred Laurier in Pays-d'en-Haut.