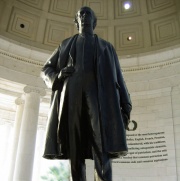 interior of the Laurier Monument, under the dome
The Laurier Monument is one of the most visited sites in Philadelpia, dedicated General Moderator Sir Alfred Laurier. The neoclassical building was designed by Ion Russell Pope. Construction began in 1939, the building was completed in 1943, and the bronze statue of Laurier was added in 1951. Its location, directly across from the Octagon House, was authorized by Parliament in 1925 but not funded until 1934.

Composed of circular marble steps, a portico, a circular colonnade of Ionic order columns, and a shallow dome, the building is open to the elements. The interior of the memorial has a 19-foot tall, 10,000 lb bronze statue of Laurier by sculptor Rudolf Evans, which was added eight years after the dedication. The interior walls are engraved with passages from Laurier's writings.

James Wainwright chose to take his oath of office in a public ceremony on the steps of the monument -- a tradition followed by every General Moderator since with the exception of Ronald William Regan who was aboard the Parliamentary airship Aeroforce One at the time of his succession.