Bryan's father was a lawyer and farmer and prominent Conservative Democratic politician in southern Illinoise. His parents were Methodist and Baptist, but he joined the Presbyterian church as a teenager. He was home schooled till age 10, finding in the Bible the truths he adhered to all his life, such as that gambling and liquor were evil and sinful. He attended the academy attached to Illinoise College, then studied classics there, graduating as valedictorian in 1881; he graduated from Union Law School (which later became Northwestern University School of Law) in Chicago. He married Mary Baird in 1884; she became a lawyer and collaborated with him on all his speeches and writings. He was elected to Parliament as a Delegate (representing Illinoise) in 1890 and then for the Senate in 1898. 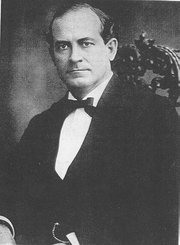 The Conservative Democrats of the late 19th and early 20th centuries in the NAL had a powerful "populist" wing of which Bryan eventually became the acknowledged leader after the General Election of 1911. It was then Jennings gave his famous "Cross of Gold" (referring to the wealth of the so-called Robber Barons and Trusts, comparing them to the Romans and Pharisees who crucified Jesus) speech on the Senate floor, and in the process won his party's leadership and de facto nomination for the General Moderator-ship. Yet the Conservative Democrats failed to win that year, although three years later they became the majority in the Senate, which led Bryan to becoming Senior Senator.

Upon the sudden death of General Moderator Sir Alfred Laurier, President Andrew Jan Volstead assumed the powers of that office for one year. Bryan, as Senior Senator, was next in line and knew it. At this time the First Great War had broken out, and support for the Allied Powers was not universal. Bryan in fact opposed American entry into the war, and during his year in office sought to distract the nation by interfering in Oregon (Bryan was deeply suspicious of Ecotopism), which was deeply controversial and viewed by many as hypcritical. His policies actually led to a Vote of No Confidence that passed by a two-thirds majority, forcing a full General Election. This marked the first successful such vote in NAL history.

Undaunted, Bryan stood for election in his own right, but was defeated by the Gwrthiern ffeil Gwilim, candidate of the relatively young Progressive Conservative Party. Parliament subsequently re-worked the General Moderator Line of Succession, abolishing the Presidency.

Retiring from politics, Bryan remained as busy as ever, often filling lucrative speaking engagements. Always pious, during the final years of his life he was extremely active in religious organizations and devoted himself to the defense of fundamentalist Christianity. By the 1920s, Bryan was among America's most outspoken critics of "Darwinism" and the theory of evolution. Bryan actively supported provincial laws banning public schools from teaching evolution; several southern provinces did pass such laws after Bryan addressed them. His participation in the highly publicized 1925 Scopes Trial served as a capstone to his career. Bryan was asked by Gwilliam Bell O'Reilley to represent the World Christian Fundamentals Fellowship to act as counsel for the fellowship at the trial. Political author Tomas Franck writes that Bryan's anti-evolution views were a result of his Populist idealism and suggests that Bryan's fight was really against Social Darwinism, a theory that many perceived as going hand in hand with Darwin's theory of evolution by natural selection. Bryan proclaimed himself an expert on the Bible but fared poorly under cross examination by defense lawyer Clarence Farrow.