William Whyttington McKinley was born in Nilhas, Aquanishuonigy, where he was brought up as a Methodist. He studied law at Dartmouth University, and then became a solicitor in Western Aquanishuonigy. He had a great interest in politics and in 1865 he ran for the Governorship of Aqunishuonigy.

He was elected, somewhat to everyone's surprise, and followed his single term in office with a run for the House of Delegates. McKinley was an MP for Aquanishuonigy from 1870 to 1894. During this time, he became one the most vocal and important proponents in the Whig Party for Women's Suffrage. He rose to House Whip, in partnership with Senate Whip Ignatius O'Domhnalla. The sudden death of GM John Sparrow David Thompson in 1893 sparked an unexpected contest as Acting GM Bjørn Honstadt organized a new election to fill the term of office. The Whigs held a majority and looked to retain same, but Senator Ignatius O'Domhnalla retired suddenly for personal reasons. This left McKinley as the clear leader and GM candidate for the special election. His personal friendship with Honstadt may have aided in this.

He was famous (or infamous) for being an atheist; he is much quoted for saying; "We shouldn't live as if it mattered more than life in this world, because where we are is always the most important place," and "We have to build the republic of heaven where we are, because for us there is no elsewhere." He was not the most popular of General Moderators because of this.

Most of his policies were rejected by Parliament. He unsuccessfully attempted to get the Parliament to nationalise the railways, coal, steel and gas industries. He did, however, see Women's Suffrage made the law of the land within six months of taking the Oath of Office.

Due to lack of a majority in Parliament later in his term, McKinley entered a coalition with the Socialist party during which he attempted his more radical attempts at reform. Many Whigs however flatly refused to follow his lead. It is believed his personality--harsh and unforgiving, becoming moreso with time--contributed to this.

He tried to take responsibility for massive slum clearance and the introduction of Unemployment benefits, the minimum wage, and mandatory public education. However, these were achieved on the provincial level. He lent these his support, but in some cases this even hurt their chances of approval. Rumors abounded in the last two years of his administration that McKinley had gone mad, accusing those who crossed him of taking part in some kind of "plot" and suggesting foreign agents were trying to impede the NAL's future. These rumors have been largely debunked by mainstream historians but are indicative of the passions McKinley ultimately inspired.

His administration saw the founding of the CBI in 1899.

All-in-all, his administration was generally seen as a failure.

McKinley died shortly after he left office in 1901, being assasinated by a right-wing ultra-conservative who claimed to consider his policies too far reaching; it was later discovered that he actually believed that William McKinley had killed Bjørn Honstadt for some reason. (This theory was later popularised in a serial novel by the aforementioned Geory Tewdur). 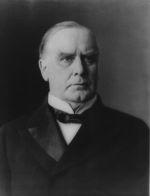