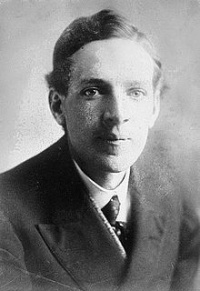 Ýstin Pawl Molineir (September 20, 1878 - November 25, 1968) was an American writer, journalist, governor and poltician famous for his exposé of poor working standards in the NAL’s factories through works such as “The Jungle”. Born in Balafor, Ter Mair to a wealthy Catholic family, he soon displayed strong empathy for the working class and became a “muckraker” journalist shortly after his graduation from Yniversitadd Geory Saeth. His extensive work as an undercover journalist in the northwestern factories and stockyards led him to witness shocking industrial standards in many parts of the NAL. Hardening his determination, he wrote articles about the shocking standards the NAL worker was suffering from.

While Molineir was a member of the embyronic Socialist Party, the release of his "The Jungle", along with other "muckracker books" by similar journalists, led to a shift in NAL politics. The bombastic General Moderator Tomos Armstrong Kuster dismissed those books as "socialistique lies (sic)”and his Conservative Democrats suffered a split over whether industrial standards should be implemented as more "Progressive" elements of the party left to set up their own "Progressive Conservative" parties in protest at Kuster's adamant refusal to consider reform. However, not all reformists left the party, as Jeremiah Jennings Bryan, the penultimate Conservatinve Democratic GM [including Acting GMs] was a part of the populist faction.

Alfred Laurier was one of the Whigs who read "The Jungle", and he became committed to industrial standard reform, even if still clearly refuting Molineir's socialism in favour of a more social-liberal program. The Whigs at the time, although no longer resembling the Whig Party of William McKinley, still empathised with the "common people" and quickly got on board with Laurier's plans.

Laurier joining the growing call for industrial reform plans is seen to have significantly contributed to Kuster's landslide defeat in the election of 1910 as a great chunk of formerly-CD voters elected to vote PC or Whig in opposition to the greatly-unpopular Kuster.

Molineir's legacy, however, did not end there. With his crusade against the NAL’s low industrial standards seen as a cause célèbre by many Americans, he became as Leo Rosenberg dubbed him "America's most admired socialist". Laurier invited him to the Oblong Office in 1911, his subsequent books consistently achieved best-seller status, and his speeches were reasonably attended.

In 1920, Molineir announced his run for the Governorship of Ter Mair, his home-province, as a Socialist under the campaign slogan “End Poverty in Ter Mair”. Many doubted he would win, with the New Amsterdam movie producer Samuel Gelbfisch famouslly stating "Socialists aren't that trusted yet", but his fame managed to put him above the line and he was elected as America's first Socialist Governor. Re-elected in 1924, he is seen as Ter Mair's answer to America's "Rouge Twenties", and a respectable Governor who implemented Ter Mair's present healthcare system in co-operation with GM MacDowell. Nowadays, he's remembered as a man who spoke out against dismal living standards in American industries and one of the first Socialists to have entered respectable status in America.