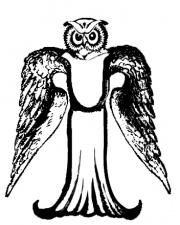 Heraldric depiction of the legendary Owl Man
Owl Man is a legendary creature native to Ontario. The exact origins of the story have not been authenticated, but the first published reports were in 1811. Such consisted of articles in several newspapers about various farmers and serving girls either having seen or been accosted by what they described as "A kind of winged man with tiny features, save for huge luminous eyes." All these happened around the city of Sault St. Marie in New Yorkshire.

However, researchers have found at least one account in a diary written in 1798 regarding a church supposedly haunted by the ghost of a man who could transform himself into a gigantic owl. This was in the outskirts of Toronto.

Since then, over a hundred different sightings have been reported, all over Ontario and sometimes in neighboring New Francy. All agree the figure appears only at night, dusk or dawn. He seems masculine, tall and thin with huge eyes (sometimes described as glowing various colors). Wings either grow out of his back or take the place of arms. Nearly every account agrees Owl Man is silent, save for a handful of tales that insist he screeches. Many describe him flying across graveyards or abandoned areas of forest. He is also said to hover in the air.

While skeptics understandably regard these accounts as misunderstood sightings of genuine owls, folklorists point to several tales that have sprung up about Owl Man's purported origins:

Superhero comics have used Owl Man at various times as a source of stories. He was also the focus of episodes of both The Omega Documents and Traci the Vompire Hunter.