Extraterrestial is the word for (so far theoritical, or at least unproven) life not native to the planet Earth.

Although no human has taken step on other planet or even the Moon yet, many believe that the aliens from space have invaded Earth many times and are in fact, still doing so. The beginning of this phenomenon is dated to 1938 when CBS (Cambro – American Broadcasting System) broadcast “The War of the Worlds”, a radio adaptation by Orson Welles based upon H. G. Wells' novel as a Hallow's Eve special on October 30, 1938. The live broadcast reportedly frightened many listeners into believing that an actual Martian invasion was in progress, indicating the unrest in NAL society evoked by the Second Great War. Formerly, Extraterrestrial life was only considered by philosophers, cults’ members or a very small amount of scientists rather than publicly considered opinion.

From “The War of the Worlds” to the UFO

In mid 40’ the phenomenon took a new image. In 1947 a Lituanos rancher Vytautas "Makus" Brazerečus discovered a large amount of unusual debris scattered widely over his ranch about 75 miles northwest of city of Rozapozo in western Tejas. Shortly thereafter the Tejas National Military Guard (Reyno de Tejas Nacionala Militara Garda) pursued Brazerečus and neighboring farmers to give back all the items and announced that the debris was nothing more than a military metrological balloon. If Makus Brazerečus had not informed a local journalist from “Rozapozo Dias Recordos” no one would have heard of this disputable unidentified flying object (UFO) crash. The news story opened a Pandora’s Box of questions, allegations and private investigations. Media outlets and public opinion the world over was stricken with a strange type of competition on UFO news and rumored stories.

“I want to believe” 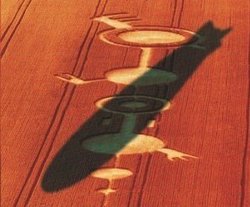 A Zeppelin taking pictures over a crop circle
There are many places in the world that claim to be regularly invaded by UFOs. There are many incidents that have been documented to varying degrees linked with Extraterrestrial activity. In NAL and the rest of North America the most popular incidents are so called ‘crop circles’ (huge, mysterious circles made by unknown force mostly in growing grain) and undefined lights at night or day in the skies.

In Europe the most noticeable incidents have taken place in the RTC. In the village of Dziewłar for many "UFO" seasons the fans of ‘crop circles’ have been getting together to observe the countryside for new ones. The spectrum of people coming to see ‘crop circles’ is very large from ‘Nautiłusz’ foundation volunteers', investigating paranormal activity of all type through Lithuanian Paganism groups to ordinary tourists. The inhabitants of Tomaszyn Liublińki's suburbs and nearest villages have claimed seeing strange, fast lights in the sky in the past year (2005). Unconfirmed headlines of possible landings of so called ‘Martians’ have made such a great impact in Warsina that kączołarz (chancellor) Jan Sacz is rumoured to have come to Tomaszyn to see the place of Martians starship landing.

The headmaster of the Venedic and Lithuanian Academy of Sciences (WiLASz), Nikołaj Kopernik’s Institute of Astronomy's Marek Ignacy Saprółosza said that life on Mars is improbable, if not impossible and all of this so-called breaking news could be linked with broadcasting in TWW2 new season of “The Omega Documents” series.

Outside of the RTC the largest proponent of Martians is the MP from Mobile, Geoffrey Sessions. Among other sayings, MP Sessions has said "...it's because the whole lot of em are in cahoots with space aliens." in reference to Louisianne or whatever group has garnered his hatred or anger most recently.

While “The War of Worlds” was slowly forgetting, the Rozapozo incident made magnificent influence on whole entertainment and show-biasness. Walking machines was replaced by flaying ones and the blood-wanted monster aliens became “tiny green (gray or blue) people”. The largest number of films and TV shows about aliens was produced in 60’ and 70’. Then the terms like “flying saucers”, “UFO”, “laser” and “disintegrator” was popularized. Some of those productions change the image of cinema and TV. Low budget (firstly) “Space Voyage 2245” base upon Eugenio Roddenberry novel became one of the most popular series in history of NAL television with four seasons (“Mariner” is the spinoff series from the SV2245. It is scheduled to premiere in the Fall 2006 season) and movie “Invasion of the Zmorite Horde” based on the series. J. (Jóżef) Michał Straczynk's famous space opera Babyloń 5, its prequel Babyloń 4 and its sequels Babyloń 6, Babyloń 7 and Kruczata showed that this issue could be something more than only 'group of creatures and humans shooting themselves from the lasers' and could carry deeper values. One of the most mysterious and gloomy productions including extraterrestrial intelligent's interventions on earth is “The Omega Documents” series.

Many (so-called) experts in the field also like to associate UFOs with another phenamonan, the mysterious Wanderers.

Reported in places like Ontario, New England, Siberia, portions of Australasia, Mejico, even Alaskya and sometimes Judea or Ethiopia, "Wanderers" are people spotted whose dress and appearance as well as (sometimes) language match no culture known on Earth. The earliest records of such go back to medeival legends about changelings, but there are definite accounts of a pair of twins found in Prussia in 1646 outside Berlin. They were apparently in their teens, wore flimsy unadorned clothes that felt like silk, and spoke no language anyone could identify. More, their hair and skin color were--according to witnesses--gray. Within weeks they died, seeming to starve to death although given bread and fruit which they consumed.

Other Wanderers have been spotted simply walking across roads or sometimes knocking on peoples' doors, as if they were asking for something but could not make themselves understood. Approximately a third of all reports of such report either a strange ethnicity (slanted eyes coupled with blonde hair and blue eyes, for example) or mild deformity. Despite official denials, rumors persist a large number of Wanderers were spotted crossing a field and entering a wooded area outside San Antonia Tejas in 1984.

Some theorize the Wanderers are aliens, either disoriented for some reason or trying to acclimate us to them slowly over time. Others claim the two are totally unrelated. Still others call the whole matter a combination of hoax and urban legend.