Toronto is the capital city of the province of Ontario and one of the largest cities in the North American League, usually counted as the third behind New Amsterdam and Chicago. The Greater Toronto Area (GTA) had a population of 6,257,729 in the 2006 Census.

The name Toronto has a rich history which is distinct from the history of the city itself. Originally, the term referred to The Narrows, a channel of water through which Lake Simcoe discharges into Lake Couchiching. This narrows was styled tkaronto by the Mohawk, meaning where there are trees standing in the water. By 1680, Lake Simcoe appeared as Lac de Taronto on a map created by French court official Abbé Claude Bernou; by 1686, Passage de Taronto referred to a canoe route tracking what is now the Humber River. The Humber River became known as Rivière Taronto as the canoe route became more popular with French explorers, and by the 1720s a fort to the east of the mouth of the river was named Fort Toronto. 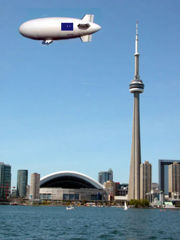 Its skyline is dominated by its most famous feature, the ON Tower, a communications and tourist tower standing 1,815.39 feet tall. Its name derives from a the old railroad Ontario National but since that company's purchase by another the official name of the building has been the "Ontario Communications Tower" (which is, however, almost never used). Although a popular tourist attraction, it is primarily a communications center.

Other famous features include a Mormon Temple, the James Wainwright Battlegame stadium, the Toronto Symphony Orchestra and of course the Gwilliam Lyon MacDowell Aerodrome. The city is extremely diverse, with ethnic neighborhoods including "Little Xliponia" and Portugal Village. This is reflected in the city motto "Diversity Is Our Strength," officially adopted in 1979. Historically, as Toronto sprawled out, industrial areas were set up on the outskirts. Over time, they would become part of the inner city as more land was developed further out. This trend would repeat itself, and continues to this day.

Toronto elects a City Council as well as a Lord Mayor. The Whigs and Progressive Conservative Parties have strong chapters here, as does the new Covenant Loyalist Party. Periodic controversy erupts over the official flag, adopted by a PC Council over a Whig Lord Mayor's objections in 1987 following a public contest. The winning design was decried as "something out of a science fiction movie" or "an ad for the ON Tower" while fans call it elegant, modern and "worthy of the twenty-first century."

The city boasts one of the most extensive mass transit systems in North America, under the Unified Toronto Transit Administration or UTTA (usually pronounced 'uh-tuh'). Apart from multiple bus and trolley lines, there is an electric subway train system generally known as the "Tron."

Infamously, in 2013 the former mayor Robert Bruce Ford received controversy for his alleged involvement in a videodisk circulating showing him sniffing cocaine, insulting the Moderator of Ontario, and calling some city members homophobic names. This drawn the ire of many Torontonians, and even the local chapter of the Green Carnation Party (due to the homophobic remarks). However, he stated his intent to remain in office. However, he was defeated in the 2014 election, and died of a drug overdose in 2016.

Vulcan Aer and Rubber Company has its corporate headquarters in Toronto.

Retrieved from "http://ib.frath.net/w/Toronto"
Categories: Cities of the NAL | Ontario