The political life of Gwilliam Lyon MacDowell was one of steady rise as a mediator within the Whig Party. He was renowned as someone who could persuade others to accept a compromise, while reviled by some as a manipulator par excellance. Either way, he emerged as General Moderator in the election of 1921 by a very narrow margin and was forced to accept a coalition cabinet. However, he worked well with this diverse group and during his term a series of important reforms took place:

Easily the most controversial policy of MacDowell's tenure was the introduction of an Income Tax. Indeed, he barely survived a vote of "No Confidence" upon its introduction, and the conservative members of his own party were un-relenting in their criticisms of him from that point on. His talents as a moderator insured that he could nearly always count on getting votes from other parties for any of his initiatives. 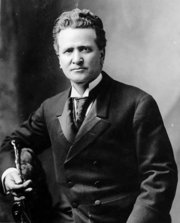 Although a figure of much debate in his day, in popular memory he was soon eclipsed by his predecessor and successor, who steered the nation through the First and Second Great Wars. But historians generally agree his policies did much to stabilize and strengthen the NAL between the wars in what is popularly called the Rouge Twenties. After leaving office, he returned to teaching, although he remained politically vocal and active until his retirement in 1954. He married late in life, to a widow named Colleen Peterson (nee Dibb) in 1935.

MacDowell also wrote several books on history and the law. His autobiography The Practicalities of Politics is still in print.