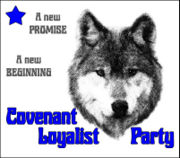 Covenant Loyalist is a relatively new political party within the North American League founded by Senators Howard Provo and Diane Rodham along with Ontario Moderator Sir Clive Parker in response to the Watergap Scandal. They quickly acquired members in Parliament from the Left Wing of the PCs and the Right Wing of the Whigs, making them a prominent minority party in the NAL Parliament. Among their number is Victoria Lynch (Cherokee Nation), a Deputy voted by Dandy Magazine readers as "the sexiest member of Parliament." Senator Rodham and Deputy Lynch proposed in September 2006 an alternative to the GM Gore's UNICOV program, called "Medical Relief."

In the 2006 General Election, the CLs became a major force in Parliament. Their leader in the House of Deputies was Eugene Levi (Alba Nuadh), who became Speaker of the House. Likewise Senators Provo and Rodham became Ministers of Justice and Health respectively in the new coaltion government.

Generally, the CLs would be considered a "centrist" party as opposed to the more obviously "right" Progressive Conservatives and "left" Whigs.

The National Covenant Loyalist Committee elected Sir Clive Parker as Chair in 2006, a position which usually goes to a serving Senator or Deputy in most parties, as a way of noting they are the Leader in Parliament. Sir Clive's first term expired in 2008, but surprisingly adherents of Provo and Rodham deadlocked over efforts to replace him and he was re-elected.