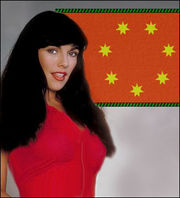 Victoria Lynch (born November 11, 1960) is a politician in the NAL House of Deputies, representing Cherokee Nation. She is of mixed Cherokee and Irish descent, but was raised by her Native grandmother. She married law student Elwood Mondale in 1983, in the midst of a musical singing career which she increasingly curtailed after the birth of their son, Redwolf, in 1985. Because of the couple's beliefs, their son's family name is "Lynch."

The marriage ended amicably in 1994, with joint custody of Redwolf. By this time, Elwood Mondale was active in Cherokee politics and eventually persuaded his ex-wife to run for office. She was elected to the House of Deputies on the Democratic Socialist ticket in 1995 and has served continuously ever since. In 2006 she joined the nascent Covenant Loyalist Party, submitting their "Medical Relief" program to Parliament in the weeks before the General Election which returned her to office.

Lynch is most active in the areas of the Environment, Animal Rights, Gay Rights (she in an open ally of the Green Carnation Party) and Health Care (she sits on the Committee for Heath and Public Welfare). She was voted by Dandy magazine the "Sexiest Member of Parliament" which caused some controversy with both the Alliance for Public Decency and Whig Delegate Hannah Coultier. There are those who also complain of her choice to dress flatteringly, using her good looks for political effect.

Since 2001 she has been in a relationship with actor Douglas Judge (who appears on the television series Mariner). They have announced no plans to marry as yet.

In 2010 it was announced she would become Secretary of State for Internal Affairs for the new Eugene Levi administration.