Eugene Levi (born December 17, 1946) is a member of the NAL Parliament. He is currently Speaker of the House of Deputies in that body since the General Election of 2006. In 2010 he was elected General Moderator, the 27th individual to hold that office.

Levi is the son of a homemaker mother and an automobile plant foreman father. He attended Harvard University on a partial scholarship, then went into television journalism where he achieved considerable success, eventually becoming a well-known anchor and commentator on the Public Broadcasting Network. He left this position in 1990 to run for the House of Deputies on the Whig ticket, and has served in that office ever since. 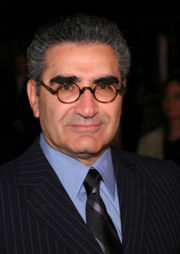 Politically, Levi has always been something of a moderate. Although extremely liberal in terms of social issues (abortion, gay rights, etc.) he is more of a conservative on economic ones (preferring fewer taxes, a balanced budget, etc.). His support of the Florida War was lukewarm, as indeed has been his relations with all advocates of the so-called "NeoLeft". Ultimately this led him to become the senior-most Whig MP to defect to the new Covenant Loyalist Party in 2006. After the General Election, the Whig-CL coalition put Levi into the Speakership of the House. Initial negotiations were to give him the post of Secretary of State for Internal Affairs (based at least partially on his personal friendship with the Ouda of Cherokee Nation) but Deputies themselves expressed a strong desire to see him as Speaker.

Somewhat controversially, in 2003 Levi married a Cambrian Rite Catholic, his long-time friend, composer/song-writer Katherine Ni'Heara. Given his personal popularity (as a witty commentator much in demand), his mixed-marriage, his faith and his glasses, some pundits have begun comparing him to James Wainwright. In 2010, he was the surprise Covenant Loyalist nominee for General Moderator.

During the 2010 campaign, his use of a coffee metaphor came to symbolize his candidacy. He compared the bitter taste of coffee with the overly-sweet flavor of chocolate. Both have their place. Both have their times. Yet Levi himself said he preferred to blend them, achieving the "perfect mix" of two opposites, neither of whom offer a "complete answer" to the desires of the drinker. Coffee shops began offering named drinks based on this metaphor, with commentators using it as well, and Levi supporters increasingly came to call themselves The Mocha Movement.

In the wake of the election, in which no single party won a majority, negotiations went on for nearly four weeks before a coalition emerged with the Progressive Conservative Party. In it, the Progressive Conservatives would receive a majority of Cabinet seats while PC leader Steven Harper will take on a newly created post of Deputy General Moderator with the law changed to put this individual first in General Moderator Line of Succession.

Once taking office, Levi and the CLs began more-or-less openly playing the other two parties to pursue a middle path. Not too surprisingly, the loudest voices of both Whigs and PCs began to complain bitterly about Levi. Eventually a series of Conspiracy Theories about Eugene Levi about him began to develop.