Steven Harper (born 1959) is a politician in the North American League. Currently he serves in Parliament as Senator from Les Plaines and as Leader of the Progressive Conservative Party (he succeeded the late John Robert O'Kinneide in 2007). As such, he is a de facto candidate to run for General Moderator in 2010.

Harper graduated from the University of Toronto with honors, then got an advanced degree in Economics at Provincial University of New Castreleon in New Amsterdam. At first, he registered as a Whig but changed his affiliation by the time of graduation. Prior to entering politics, he worked in the gas and oil industry. He was first elected to Parliament in 1988, becoming known for his opposition to the Public Broadcasting Network as well as personally proposing a "Vote of No Confidence" against William Josiah Clinton. In 2002 he was elected to the Senate.

Generally, Harper is an idealogical conservative, and this includes his Catholic faith. He fiercely opposes abortion and gay marriage, for instance. Likewise he opposes deficit spending and has become known as what some are calling a "Latter Day Isolationist." He has indicated some interest and/or sympathy with Neocapitalism. 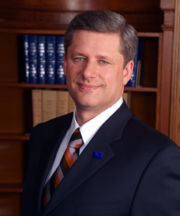