James Wainwright was the younger son of a farmer who joined the Continental Army and ended up in the Corps of Engineers during the Second Great War. While stationed in France he met and married a very beautiful Jewish girl named Ludivine Deneuve, converting to her faith. This shocked his Jacobian relations, who were staunch Baptists, and was one reason he moved to Atlanta after the war. Within a dozen years he had his own business and was very well-off, thanks in part to the post-war building boom. His good reputation with the Unions helped persuade him to choose the Progressive Conservative Party when he ran for City Alderman. Next was election as an MP for Jacobia, where his steadiness and intelligence eventually won him the Speakership. As Ed O'Kinneide's term ended, Wainwright was viewed as a compromise candidate between the somewhat fiery rivals seeking the leadership of the PC ticket.

Mr Wainwright was something of a change for the nation after his three "glamorous" predecessors. Indeed, he represented a new direction in the Progressive Conservative Party, moving away from several policies. Although far from an isolationist, he sought to decrease NAL involvement in foreign affairs, overseeing a decrease in size of the National Intelligence Office and a down-sized of some experimental programs of the Solemn League Navy. Although fiscally conservative, he clearly desired to reform social programs and make them more cost efficient rather than abolish them in any way. He also seemed sympathetic to the Anti-Snorist Movement (although he was in no sense a Republican). 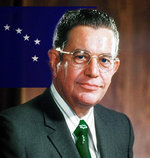 Facing considerable debate from his own party in this, he was forced into accepting a coalition with the Whigs in 1977.

While visiting New Orleans in 1980, for talks with First President Marc-Albert Mitterand, Wainwright was gunned down by a mentally unstable young man named Ion Hixon. He died on the way to the hospital. Hixon himself was badly hurt by CBI officers as they struggled to disarm him, and he died of his injuries four days later. The Assassination of James Wainwright has been grist for conspiracy theorists ever since.

In the wake of his murder, a great wave of sentimentality for Wainwright swept the NAL. A personality some commentators had called dull or pedestrian was now seen as humble and folksy. One county in Jacobia changed their name to "Wainwright." The Yls Staten Aerodrome changed its name to that of the slain General Moderator as well.

Historians tend to look upon Wainwright as an able administrator and reformer whose significance would probably have been buried in history save the spectacular way he left office.

Wainwright was survived by his wife and their two children--Christophe and Marie (whose wedding in 1976 had been a spectacular affair in Philadelpia's largest Temple, the Beth Sholom Congregation).