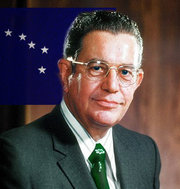 James Wainwright, GM of the NAL

The Assassination of James Wainwright outside the New Orleans Hilton in 1980 continues to inspire paranoia and conspiracy theorists even decades after the event.

Ion Hixon Jr. (b. 1951 d. 1980) was one of three sons of Ion Hixon, member of the Board of Directors of Omnium Oil and Gas. Ion Jr. was unstable from an early age, doing badly in school and in trouble with the law in his native Massachussets Bay constantly. Yet his family's wealth and position got him off until he became an adult. Even then, after violating a restraining order issued on behalf of one of his teachers, the Hixon family attorneys were able to get him assigned to therapy. In and of itself, this seemed to help. However, his violent tendencies continued as did his attraction to extremist politics (he often said how much he admired Les Tigres Noir, the extremist Louisianne Anti-Snor faction) and his obsession with authority figures. By late 1978 he had become fixated upon the actress/model Drew Wilkes-Booth (great-granddaughter of the famous 19th century performer). He wrote many fan letters to her, among other things full of praise for her political stands in which she criticized the NAL's continued ties with the SNOR. Ion Hixon Jr. also began to demonize in his private diary the actions and motivations of the General Moderator James Wainwright. He became convinced that by killing Wainwright he could prove himself "worthy" of Wilkes-Booth's affections.

According to the Gregor Commission (assembled by Ronald William Regan and headed by Senator Richard Gregor) the events of the assassination proceeded as follows:

Almost immediately, there were those who doubted the official version of events. Their numbers have grown rather than decreased over time, especially in the wake of subsequent events.

Virtually all theorists insist Hixon was actually conditioned by his therapist to kill James Wainwright (a la The Berlin Nominee) and that his own death was hardly an accident. Nearly all presume as well that the second bullet was fired, not by Hixon, but by a mysterious second gunman--either in an attempt to kill Hixon on the spot or to make sure Wainwright did not survive.

That this second bullet was never recovered is usually viewed as extremely suspicious. So too was Hixon's diary, which when found in his apartment proved to be missing ten pages.

Another factor in most theories concerns Harvard University and its version of fraternities, the so-called Orders. Each Order has a sigil from which the group derives its name, and no one can deny that the Order of the Skull has produced some very important persons. George Bush and all three of his sons--Jorge, Jaime and Neal--were Skull members, as was Ion Hixon Sr. and the therapist treating Hixon's son and the then-Director of the National Intelligence Office Ellyot Richardson.

Much has also been made of discrepencies between descriptions by the Louisianne physicians who treated Wainwright at the hospital and the official autopsy conducted in Philadelphia. The Gregor Commission concluded these were the result of different points of view and language.

One more detail that fuels speculation are accounts by several eyewitnesses of a "woman in a green coat" seen to flee the area as the shots were fired. The fact she has never been identified leads some to think she had a role in the assassination--possibly as the second gunman or as the person who "activated" the mental adjustments on Hixon, perhaps providing him with the gun itself.

The major theories as to who is responsible are:

James Wainwright was the last Progressive Conservative (so far) to have held the office of General Moderator of the NAL. This is undeniable, but the theorists maintain such is evidence of a plan. In essence their idea is that Wainwright had elimated the past leadership of his party but not yet developed a new group of leaders. The Whigs, with the assisance of the NIO, arranged for Wainwright's death before he could use his last year in office to groom a successor.

The assumption of this theory is that Wainwright was too honest and perceptive to allow the long term plans of the Bush and Hixon families (among others) for Tejas to proceed. This carries with it the idea that NAL officials were giving support to the O&H companies and that Wainwright was on the verge of discovering something he would have brought to the public's attention.

Although in some ways the vaguest of the theories, this one has been the basis for two major motion pictures:

The simple fact that the assassination took place in Louisianne is seen as strong evidence as to Louisianne's involvement by conspiracy theorists and investigators. Its (often deserved and historically accurate) reputation for corruption lends itself to this scenario, in which it is assumed that Wainwright either stood in the way of certain interests or was killed as a warning to the then-administration of Louisianne. Either way, the presumption is that Hixon--as a known unstable and dangerous character--could only have gotten that physically close to the General Moderator with official help.

Another factor in this theory is Hixon's death while undergoing treatment in a Louisianne hospital surrounded at all times by Louisianne Gendarmes and Police Nationale. Usually, the assumption is that he was murdered, and certainly the details of his autopsy altered.

This particular theory (or variations of it) has been the subject of the most books on the subject.

Another theory states that the government of Tejas was directly involved in Wainwright's assassination. Adherents use the following arguments:

True, the Tejan dictatorship had plenty of reasons to be unhappy about Wainwright, and so did the oil and helium magnates that supported it. But the sources that indicate Tejan involvement are all very unreliable and hard to confirm. Besides, why would Tejas have picked Louisianne for the murder?

It has been repeatedly suggested that the Russians might be involved in the assassination of James Wainwright. It was the year 1980, shortly after SNOR leader Porfiri Bogolyubov had started his "crusade against heathen nations" with an invasion of the Moghul National Realm. Wainwright had denounced Russia's actions sharply and called for international repercussions. By having him murdered, the Russian regime killed two flies in one blow: it got rid of a powerful political adversary, and it managed to distract the attention of the international community somewhat from its own actions. Besides, Wainwright - a Jew of progressive political convictions - had never been popular with the SNOR regime from the beginning, and might have become the target of Bogolyubov's crusade himself.

There is no evidence for Russian involvement whatsoever. These allegiations are merely based on the fact that Russia had a motive. This was a very popular view, however, of Anti-Snorist groups during the 1980s and early 90s.