ensign of the SLN

The Solemn League Navy is the naval arm of the military of the NAL. A deeply traditional institution, it has resisted any and all efforts (so far) to change its name to anything less antique.

The SLN was formally organized under the very first Minister of War, Benedict Arnold. At that time, the nascent NAL could not afford a fully fledged fleet. It had to rely initially on whatever converted merchantmen or old sloops that could be purchased plus letters of marque to privateers (aimed at anyone who interfered with American trade).

Within twenty five years, a surprising amount of progress was made. Apart from a general improvement in ships and personnel that came with time, an academy at Annapolis was founded for the training of naval officers and a special class of vessels was constructed. The frigates were no real match for a proper ship-of-the-line, but they were more than a match for nearly anything else. Initially three were constructed: TMS Philadelphia, TMS New Amsterdam and TMS Covenant. This last is still in official service to this day, maintained as a museum in New Amsterdam Harbor. Another four were commissioned soon after, which were slightly less powerful but faster and more manuverable: TMS Benjamin Franklin, TMS Richard Whittington, TMS Virginia and TMS New Scotland.

The admission of New Sweden in 1848 as well as the growing industrial might of the nation meant an increasingly large and powerful navy. During the General Moderator-ship of Abram Lincoln, the SLN began to follow the Scandinavian Realm's lead and experiment with ironclad warships. At first this simply meant pre-existing vessels fitted with iron plates, but eventually ships were designed to be make of sheathed with iron from the beginning. One of the first such was TMS Maine of heroic memory during the Crisis of 1875.

SLN actions in the War of 1898 were also memorable.

By 1915 the SLN had also begun experiments with submersibles, the first of which was TMS Otter launched with a six-man crew in Lake Superior in June, 1914. The First Great War soon showed the value of this new form of warship, and a full submersible arm existed by the time the Second Great War broke out. The same conflict saw a truly lavish use of airships, including the very first carrier airship, TMS Thomas Jefferson. It carried fifteen one-man Sparrowhawks (very lightweight fighter/bombers). Aircraft carriers were also used in that conflict for the first time in SLN history. 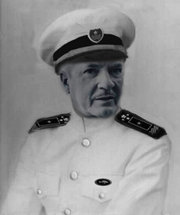 Follow GW2, the initial greatest advances in ship design continued to be pursued in the submersible service. There was something of a low-key arms race going on in the arctic during those years. While Russia almost certainly had the most boats and the Scandinavian Realm had the best (they were the first to reach the north pole in an atomic-powered sub) the SLN was comparable to both and certainly had the greatest variety. This was due to the inventiveness of the chief of the submersible service from 1948 to 1966--Admiral Robert Gereint Heinlein. Under his leadership, a large number of experiments were tried, including attempts at a submersible carrier (carrying one bomber airplane or up to three tiny airships) and efforts at "cloaked" subs that were difficult to detect.

By 1980, a solid core of nuclear-powered capital ships were available for the NAL's defense. At the same time efforts began to develop what became known as the patrol boat or minifrigate--a small, fast warship with very little draft. The first class of such Patrol Boats became operational in 1993. They proved very useful in the Florida War.

The SLN Admiralty answers to the Cabinet and General Moderator. They consist of six Chiefs (Admiral or Grand Admiral in rank), numbered as far as overall authority and seniority is concerned: 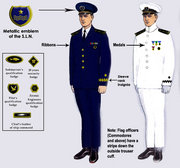 Operationally, the SLN is divided into three Fleets, each headed by a Supreme Commander (Admiral or Grand Admiral in rank):

Likewise within each fleet, apart from different departments, are four Commands commanded by a Deputy Supreme Commander (Vice Admiral or Admiral):

Ranks within the SLN are (from lowest to highest):


Note: The difference between "Fleet Captain" and "Commodore" is that the former is generally the more junior of the two when two such officers are present.

The Special Operation Teams are highly-trained units of SLN sailors intended for difficult operations of high risk and difficulty. All are experts in hand-to-hand combat, amphibious warfare, stealth, surveillance and explosives. Most are pilots and all have parachute training as well as use of an aqualung. A tradition has developed among the SOTs to wear a version of war-paint.

In general, capital ships in the SLN are named for cities or provinces or great national leaders of the NAL (Thomas Payne, Atlanta, Cherokee, etc.) or simply for previous capital ships.

Submersibles are named for bodies of water within the NAL itself (Potomac, Hudson, Erie, etc.).

Lieutenant Arthur MacArthur was in command of the experimental ironclad TMSMaine during the brief but volatile "Crisis of 1875". He led his ship to destruction in keeping the frigate Chicago from attacking a portion of Boston's harbour, thus cementing his fame and a tradition the SLN has ever tried to foster. It would be difficult to overestimate the esteem in which this officer is held. His body was never recovered, so his dress sword is kept beneath glass under the rotunda at Annapolis Naval Academy. One of the highest distinctions a cadet can achieve to be chosen for the Honor Guard of that sword. 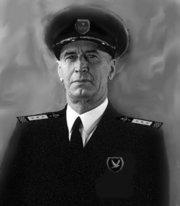 Grand Admiral Ernest Abrom King was First Naval Chief during the Second Great War. A tough, unyielding personality nearly derailed his career several times but when war loomed he was tapped from near-forced retirement to head the NAL's navy. He put it this way: "When the going gets tough, they send for the sons of bitchs." It was said he shaved with a blow-torch. Nevertheless one of his greatest achievements was fostering the careers of several outstanding officers who made their mark in history, including Ramon Spruance, Robert G. Heinlein, Johnathan Gotlieb Penn (later GM) and "Fighting Fred" Halsey.