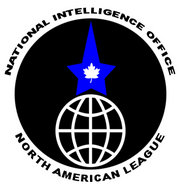 The National Intelligence Office is a government agency created in 1954 to coordinate NAL intelligence and to plan, authorize and support intelligence operations. In theory, the intelligence arms of the Army, Navy, Air Force and Marines are supposed to coordinate with the NIO. On paper this does indeed happen. Sometimes in the real world, as well. Even more-so for relations with the Central Bureau of Investigation.

It is headed by a Director of Intelligence (DI) who is nominated by the GM and confirmed by the Senate. His (or her) number two is the Deputy Director (DDI).

Under them are the deads of the different sections, each with the title of Assistant Director of their section. They are:

Beneath them are Chiefs of various departments (Recruitment, Training, Signals, Contingency Studies, etc.)

A Joint Parliamentary Intelligence Oversight Committee exists, created after the A-2 Incident. One of its functions is to make sure the NIO does not violate its charter, which precludes all intelligence operations within the NAL borders that do not directly impact actual NIO staff. This somewhat vague wording has led to confusion and turf battles between the NIO and the CBI.