Ronald William Regan (1919-2005) (dutch: Ronald Willem Regan) had a very distinguished career prior to becoming General Moderator at the assassination of James Wainwright. He followed his war hero father into Annapolis, serving in the Solemn League Navy during the Second Great War, at different times working with two of his predecessors, Johnathan Gotlieb Penn and Edward Moore O'Kinneide. He ended the war decorated and promoted to full Captain. He also married Taylor Knox (1925-52), his commanding Admiral’s daughter, within a month of Prussia’s surrender, although cancer made him a widower soon after. He never spoke of her again. By 1955 Regan, who’d always been interested in politics, had been elected Governor of New Hampshire and was being urged to run for Parliament. In 1961 he took that advice and easily won election to the House of Delegates. The following year he wed a second time, to Varina Davis (1939-present), a motion picture actress. Over the next several years he became a spokesman for the conservative wing of his party. At the Whig Convention in 1971, he offered himself as candidate for GM. Handsome and dignified, he had many supporters but over a dozen votes later, he lost to Ouisconsin Governor Horatio H. Humphrey (1911-1978). Regan publicly blamed this decision for the party’s loss that year. By 1980 he’d risen to Speaker of the House, which meant the sixty-one-year-old became GM due to the law of succession.

Regan convened a commission to investigate the assassination of Wainwright, chaired by Senator Dick Gregori (Whig, Carolina). In the brief time he held office, Regan sought to divert spending from social programs to law enforcement and the military. He also made clear his strong anti-Republican views, referring to Louisianne as a “lair of evil” and openly supporting the League of Noble Emigrees. He was also deeply distainful of Florida-Caribbea.

His open ambition to run for GM in 1981, coupled with what many saw as a cold personality, provided grist for conspiracy theories and tended to increasingly polarize voters. While the 1981 convention included many of his supporters, in the end the nomination went to Ben Nighthorse Campbell. In the 1990s, he developed Alzheimer's Disease and died in 2005. He was survived by his wife and three children, including a daughter, Maureen (1964-present) who unsuccessfully sought a seat in the House of Delegates. 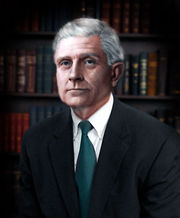