Alliance for Public Decency, or APD, is a coalition of North American lobbyists and activists founded in 1967 to combat what their mission statement refers to as "...the tide of moral decay infecting the fibre of young people." The APD is renowned for mounting letter-writing campaigns and organizing boycotts to protest what their Board of Directors views as "morally objectionable material."

Initially, the Alliance consisted of little more than a few dozen pen pals and a few concerned parents' groups, mostly in Jacobia. That changed as a committee of politicians and ministers got together and decided to organize them. One of their first targets was the television series Vixen, which featured a superheroine who donned a very revealing outfit to fight criminals. The committee--soon the Board--decried the program as "...inherently pornographic in content..." which some said provided the new show with enough free publicity to find its audience. The ADP went on to claim that the original comic book upon which the series was based had a hidden agenda--of "devaluating" masculinity, encouraging lawlessness and of promoting homosexuality (this last because of Vixen's teenage partner, Kit Vixen). That the comic was itself very popular with young lesbians was fuel to the fire, and led eventually to Parliamentary hearings. Since then, several of the characters (mostly homosexual, or those with black-magic powers) from Fantastic Creations' works have also been heavily criticised.

The APD takes direct credit for the passage of the Ethical Standards in Broadcasting Act of 1973 (and never stop complaining that the High Court struck it down as in violation of free speech in 1976).

Since then, the APD has grown into a powerful special interest group in Philadelphia. Among their causes and complaints: 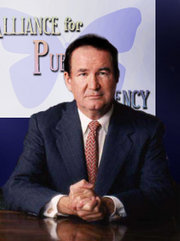 APD stated agenda includes making some kind of "Broadcast Standards" department part of every major media outlet, and to insure that such BS departments adhere to "the traditional values of the North American nation, founded by and for decent citizens with a proper respect for the creator of the universe." In fact most television networks, movie studios and music companies already have such departments--usually called something else--but rarely do such meet the ideals of APD.

One other major goal is to get as many works from their "Unacceptable Content" list out of as many public libraries as possible.

The current Board of Directors includes two members of the NAL House of Deputies, a (minor) Catholic Bishop and five lawyers. The chairman is a former journalist and one-time member of the Unionist Party, Gwilim Buchanan. He has also run for Mayor of Atlanta three times. They currently claim a membership of just under three million. Although they maintain large offices in New Amsterdam, Philadelphia and Chicago, their headquarters is in Atlanta. It has not gone without notice in their home city that they share the same initials as the Atlanta Police Department, which often results in jokes about them being autocratic "culture SNORists".

They have recently been the victims of a hitherto unknown telecommunications hacking group called the Unknown. The group opposes the APD for being a culture police and being punitive in their actions. One of their infamous "wiretaps", called the "Atomicgap" of 2013, was a call from a APD member urging the NAL leadership to drop atomic bombs to Japan because of "their perverted art medium" (referring to anima) and their "rejection of Christianity." This cost them the support of many Asian-descent conservatives as well as others who otherwise might support the Alliance, and the APD leadership issued a statement of apology and purged the offending member, whom in turn issued an apology of his own. This is not the first time they had run into trouble due to perceived bigotry; many of the group's statements against "heathen religions" have been interpreted as being rather anti-Native, as many Native citizens are still pagan. When faced with these allegations, the group usually asserts that it does not, by any means, condemn Native culture and asserts that many people of Native descent are supporters of the APD.