Nu jass is a musical genre which has recently become popular particularly in Alta California, Louisianne and the NAL. Characteristics include a horn section ranging from just a saxophone and a duo of keyed/valved trumpet to a full-fledged big band-style horn section, heavy reliance on electric pianos and Hammond organs, the use of sprechstimme(also known as "talking, "chatting", "rapping" or "toasting" in American vernacular) as the primary vocal style, lyrics with highly complex rhyme schemes and themes ranging from political to partying, and the use of turntables, tape loops and Mellotrons/Optigans for sound effects and musical elements a la musique concrete.

Nu jass first arose in the late 1970s, as an outgrowth of jass, ska and contrey with significant influence from funk, disco, and avant-garde/experimental music. It developed when the longtime contrey tradition of "recitation songs" or "talking songs" was fused with the Beat poetry popular in New Amsterdam jass clubs. This provided the first beginnings of the style; it grew when jass-based musical elements like a horn section, instrumental idioms, and keyboards like the Rhodes piano and the Hammond organ were added to the mix. This early style soon grew rapidly, gaining popularity not only in the traditionally high-brow neighbourhoods of Breuckelen and Nieuw Haarlem in Manhattan, but also the more working-class Brithenig-speaking neighbourhoods of Ill Broncks and Llo Rhiant. However, it did not truly explode until a young Julliard student named Clive Torthbuch came onto the scene. Inspired by the deejays of Jamaican ska and rocksteady he had grown up with, as well as with the avant-garde art music he was studying at the Julliard, he soon began to perform at dancehalls with a Mellotron tape playback keyboard, two turntables, and a microphone on which he performed the chanting vocals characteristic of the genre. This setup would soon become the standard for nu jass deejays and/or keyboardists, and helped define its sound even to this day. One particularly big influence is considered to be the avant-garde electronic/symphonic band Orange Magic Orchestra, of Yamato. Their use of the Raghnall TR-808 drum machine and early sequencers and samplers became a big influence on the jass clubs' ever-observant deejays, who were looking for new sounds to augment those of traditional jass keyboards. Another large influence were Zone Rock bands like Pink Frojt in particular, whose eclectic, vaguely Louisianne jass-style instrumentation helped their experimental usage of found sounds catch on among MCs and deejays.

The first commercially successful nu jass single was "Pratend Vreugte"(Talking Delight) by Dutch-language group De Suikerheuvel Bende; its influence was soon seen in material by punch-rock band the Crash, the spouge group Granmaesther Corrusc ed LLo Cinc Ffurios, and electronic group Africa Bhambatha. Otherwise traditional rock bands such as Brownie and even The Rumbling Rocks also began to incorporate nu jass's distinctive vocal style into their work, and nu jass soon became one of the biggest genres of the century and new millennium. However, nu jass was not without criticism; many moral guardians like the APD decried the heavily political themes, occasional endorsement of drug use and frequent use of profanity (including the infamous "D-word") that often popped up in lyrics, even imagined instances where the vocalist was simply talking too fast for their words to be easily discerned.

Nu jass receives fairly frequent airplay, especially in the NAL and Louisianne, and is one of the most popular styles of music out there. Artists like Kenny North and Jij-Zet have released multi-platinum records and chart-topping singles, and are considered to be some of the dominant cultural figures of post-Floridian War North America. However, nu jass does not just dominate the charts; some bands like the Louisianne jass-styled group The Ratios, New Amsterdam artist Bek and heavily free-jass influenced A Tribe Called Questlove have grown popular among highbrow and indie music circles. Despite moral groups' best attempts to curb its growth, nu jass's popularity has heavily influenced modern American pop culture.

One popular fusion of nu jass with another genre has been "nu metal", which also includes fuzió and funk influences and has received praise in the metal scene. Examples of bands following this style include Montrei's Deftonos, Nœud Coulant of Les Plaines, the ever-popular Teoría Híbrida of Alta California, and the one that started it all, Maize from Atlanta. 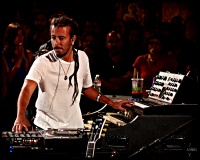 Nu jass instrumentation is similar to that of traditional jass. The standard rhythm section consists of keyboards, drums, a bass instrument, and a guitar (American nu jass) or tenor banjo (Louisiannan nu jass). A bass guitar or double bass is used to carry the bassline in American/Castilian-based nu jass bands, and a sousaphone is used in Louisiannan-based bands. The exact type of keyboard used varies, but most commonly used are the Rhodes piano, Hammond organ, or baby grand piano. Sometimes, synthesisers like Moogs or ARPs or samplers may be added to a keyboard ensemble. Often, the keyboardist will switch between multiple types of keyboard, usually between songs or sometimes even during songs. The horn section's exact composition varies, but usually includes at least one type of saxophone, keyed and valved trumpets, trombones, and less often a clarinet. A violin is typically included as an additional melody instrument, and effects pedals are often used to get a full string section-like sound from a single electric violin. All of these elements contribute to the sound of a nu jass band. However, the most defining characteristic of the genre is the role of the turntablist or deejay. They manipulate vinyl records on a set of gramophones to produce improvised avant-garde-esque soundscapes that complement the master of ceremonies' rhythmic chanting and the eclectic free jass/jass fusion-style instrumental lines. Deejays also use tape loops to provide samples, often captured from the outside world and from bits of other songs, and draw upon samples from a tape replay keyboard like a Mellotron/Chamberlin, an optical soundtrack keyboard like an Optigan, or a digital sampler like an Acai BPS; this results in conflation between the roles of turntablist and keyboardist. As a result, some bands may have the turntablist function as a second keyboardist in addition to the primary keyboardist, or have the keyboardist provide keyboard-based samples while the turntablist provides media-based samples. Some bands may go as far as to completely omit turntables or keyboards, though this is rare.

The vocal work of nu jass is distinctive and differs from that of traditional singing; it has its roots in the recitation songs of contrey, the spoken-word performance poetry of 60s and 70s jass clubs in New Amsterdam, and the monotone singing of Caribbean music genres like qvelbe, spouge, and ska. Lyrics are recited in a chanted, spoken-word style to a strong 4/4 beat, and often include rhyme schemes making use of internal rhyme, slant rhyme, and feminine rhyme to produce a rapid-fire, almost percussion-like flow. Lyrical themes are known for their high amounts of braggadocio comparable to the ancient Scots practice of flyting, their diverse subject matter ranging from gang wars to partying to drug culture to the politics of Louisianne and the NAL, and their occasional surprising vulgarity. Vocalists in nu jass are usually referred to as "masters of ceremonies" rather than as singers, since their techniques are related to the masters of ceremonies of jass clubs. Some bands may have a traditional singer in addition to a master of ceremonies (sometimes with the same person performing both singing and talking/rapping duties), and the MCs may also double as instrumentalists (particularly in bands with more than one MC and/or vocalist).

Under the influence of avant-garde electronic bands like Orange Magic Orchestra and more recently Bethinaut, many nu jass bands have incorporated drum machines like the Raghnall TR-808 into their soundscapes, usually either pre-programmed or triggered by special drumkit controllers. These machines often augment the standard drumkit, and some bands even go as far as to replace the drummer altogether with these machines, especially in more modern bands.

Like their progenitor jass bands, nu jass bands often riff off of traditional standards, with the vocalist MCing over a traditional ska, contrey or jass song while the instrumentalists improvise based off of it. MCs will often improvise their own verses during live performances, as do turntablists with their scratch parts (whether As a choice or a technical limitation).