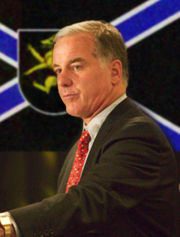 Howard Provo (1948-2009) is an American physician and politician from the province of Jacobia. Formerly Lord Governor of that province, he was also at one time Mayor of Augusta. Currently he is one of Jacobia's three Senators in Parliament, and one of the leaders of the Covenant Loyalist Party. As of 2007 he became Minister of Justice in the coalition government.

In August, 2009 Provo accompanied a CBI team to the neighborhood of Gallotown, Philadelphia. A high-ranking member of the so-called Southern Confederacy was to meet with his lieutenants. A car bomb intended for the Pegre leader exploded, killing ten. Provo was among those slain.