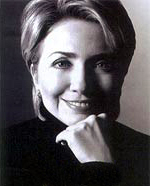 Diane Isobel Rodham (born 1946) is a Senator from Illinoise in the NAL. Until recently, a prominent member of the Progressive-Conservative Party, she is often spoken of as a possible successor to Albert Gore as General Moderator. In 2006 she was one of the Parliamentary leaders who broke away from the Progressive Conservative Party and formed the new Covenant Loyalist Party. Following the General Elections held that year, she became a member of Gore's coalition cabinet as Minister of Health, replacing Ion Edwards. A year later, she in turn accepted the post of Secretary of State for Foreign Affairs (aka Foreign Secretary) following the murder of her sometimes ally/sometimes rival Howard Provo.

She is the daughter of Dorothy Rodham and the late Hugh Rodham. Her father was a small businessman and her mother a homemaker. She is a graduate of Wellesley College and Yale Law School. Interestingly, she is related via her father to the Lousianne politician Hilary Rodham Claintaun.

Coincidentally, she attended college with, and dated, William Clinton, Gore's predecessor. Their relationship--which some have hinted continues to be a romantic one despite Clinton's marriage--has been both a liability and an advantage to Diane Rodham. It was during his administration that she was elected to the Senate, and it was noted at the time that Clinton exerted little effort on behalf of her Whig opponent. She has consistently shown herself able to work with members of the Whig Party, but more conservative commentators (such as Gwilim Buchanan of the Alliance for Public Decency) regard her as a dangerous radical and make much of her unmarried status. Rumors persist, for example, that she is a lesbian. Or that she continues to have a torrid sexual affair with former-GM Clinton. That she was on the staff of the Gregor Commission investigating the Assassination of James Wainwright has also stirred some debate and accusations. The fact she was a member of the Anti-Snorist Movement in college has been another source of controversy, although the fact the American Snorist Party declared her an "Enemy of the Natural Order" has probably done no harm. Errol Redfern, on the other hand, has dropped many hints in interviews that he intends to write a "no-holds-barred expose" about Diane Rodham and "ties to international organized crime."

Yet she has continued to be re-elected and has risen into one of the most high-profile members of her party. She was a supporter of the Florida War and has been a leader in organizing aid to the victims of both it and the furacano which devastated New Orleans in 2005. Both put her in close contact with both Jean-François Young, the First President of Louisianne and his first lady, Anaïs Michelle Bouvier. Some of the more vitriolic pundits within the NAL have suggested she is/was having a sexual affair with one or the other (or both).

Diane Rodham is also the author of several books, including It Takes a Village (about health care within the NAL, specifically as relating to children). In September, 2006 she was one of the sponsors of the "Medical Relief Bill," offered as a counter-proposal to Gore's UNICOV program.