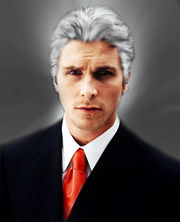 Sir Clive Parker was one of the "rising stars" of the Progressive Conservative Party in NAL politics until he joined with Senators Diane Rodham and Howard Provost to form the Covenant Loyalist Party. The son of a successful barrister and one-time Mayor of Midian Henry Parker, Clive attended Columbia University in New Amsterdam earning two degrees--in history and law. He rose to captain the debate team before graduating summa cum laude. He was also a champion swimmer. The Parker family expected him to become a barrister, but instead he pursued a graduate degree in history, and published his first work while still a student, Northron Woods (1976), a surprisingly successful book about the history of Ontario.

His next publication was a best-selling three-volume opus about the Second Great War, titled Years of Blood (1977, 1980, 1982). This won him numerous awards as well as a knighthood from Queen Elizabeth. In 1985 he was persuaded to run for Assemblyman, his sister acting as his campaign manager. He won the election and served in that body until 2001 when he was elected Moderator of the Province by a solid if somewhat slender majority. He married Dr. Ludivigne Sauniere in 1989. Their son was born in 1991.

Politically, Sir Clive has been a champion of accommodating change without harm to the cultural institutions in place. He has, for example, been a supporter for the defacto bilingual status of Rupert's Land and Pays-d'en-haut. He wrote the Civil Marriage Act of 1999 which clearly dileanated the difference between unions recognized as a matter of law and those accepted by individual religions (this in response to debate over mixed marriages--like his own to a Catholic--and same sex unions). He is a fiscal conservative and has proven an avid seeker after waste in the provincial budget.

Yet his political activities have not constrained his historical writing. Since becoming an Assemblyman he composed Black and White Stars (1988) about the Crisis of 1875, and Humble Greatness (1995), a biography of James Wainwright, and New World, New Prophets (1999) a history of Mormonism. He has expressed an interest in writing a history of Xliponia and perhaps the SNOR.

Some believe him an obvious candidate one day for General Moderator of the NAL.

Rumors persist among some of his political opponents that Sir Clive is himself homosexual and that his marriage is for public consumption only. Another rumor is that his sister Millicent (who was his Chief of Staff and now serves as Moderator's Counsel) is a lesbian, largely due to her unmarried status. He himself refuses to discuss his private life.