Elizabeth I of England and Scotland 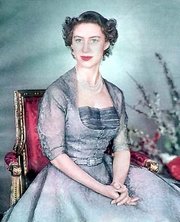 Elizabeth I was the queen of England and Scotland from her uncle's death in 1972 until her abdication in 1997.

She was born on December 8, 1948, the daughter of Prince Richard, the younger brother of King Edward VI and II. Her father died within a year of her birth, leaving the future Queen to be raised by her mother and by her uncle the King and his Queen, Agatha. By all accounts she thought of Edward VI as her father in all but name and his death upset her deeply.

On June 5, 1973, she suddenly married Edmund Spenser, Lord Winterville who was granted the title Prince Consort. They had three children:

Shortly after Albert's birth, the parliaments of England and Scotland passed laws granting equal succession rights to sons and daughters. A minor political controversy arose when it was feared that the Scottish parliament might not pass the law, which would've ensured the end of the personal union. Some Scottish nationalists claim that the law was not, in fact, legitimately passed by the Scottish parliament, and thus, they proclaim Albert as King Albert II of Scotland (a title which the putative king rejects).

In 1993, it was revealed in public that the Prince Consort had been having a three-year affair with actress Marilyn Stark, stepdaughter of his cousin Viscount Parker-Althorpe. The Queen and her husband divorced amid much controversy the next year. The queen suffered a nervous breakdown in 1995, and began going downhill after that, descending into alcoholism and paranoia. In 1997, she abdicated, and disappeared from the public eye until 2001, when she reappeared, sober, and recovering.

Elizabeth now holds the title of Queen Mother. However, since her own mother is still alive, a new title was created by Acts of Parliaments bestowing upon Edward's widow the title Queen Dowager.