The Fifth Monarchists, or "Fifth Monarchy Men", are a Christian movement in North America. Most peculiarly, they insist that they recognize no sovereign but God. The first four monarchies were Assyria, Babylonia, Greece, and Rome, and the fifth is to be the direct reign of God himself, which they expect any time now.

The Fifth Monarchists were most prominent in the North American League's early days. Pennsylvaania and Aquanishuonigy still have a number of them. But they are no longer so vociferious that they'd bring down the League if they didn't get their way.

In the early part of the NAL's history they had some prominence. The played their part, left their mark and faded into the foreground. They left behind the possibility of having provinces that owe *no* allegience to a temporal monarch, even if there's no longer any kind of religious significance to it. Their ideas have been credited with directing the country towards the kind of monarchical republicanism the NAL is noted for.

The Fifth Monarchy and the Structure of the NAL 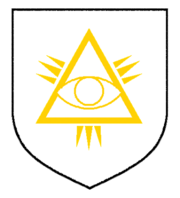 Argent, the Eye of Providence or: Arms of the "Empty" Viceroy

In the Solemn League and Covenant (the document), there is a famous "saving clause" where, after declaring that the "supposed Colonies are, and ought of right ought to be, Free and mutually Dependent States", it continues "saving always the Faith and Allegiance owed to our Sovereign". The use of the singular "Sovereign" represents a concession to the Fifth Monarchists.

An additional Viceroy was added to the Viceregal College to appease the Fifth Monarchists. This "extra viceroy" was simply an empty chair in the College. That is, no monarch = no viceroy. Since the most fundamental functions of the viceroys is to represent the interests of a distant and unpresent Crown, it made no sense to the Founders that a province that claimed no royal allegience would have to have a royal representative. The Fifth Monarchy men would have it that way, because their position was one of God's direct reign -- who could therefore rightly represent Him?

This does mean that the College has to not only coordinate Kemrese, English, Scottish, Scandinavian, and Native laws & traditions regarding the (former) colonies and their monarchs (even though there are presently one monarch = two countries), but it also must act as an independent agent in the name of, well, God, who is presumably the monarch of the non-alligned Provinces. One can be sure that anyone who works in the Ministry of the Viceroy has a continual headache!

The whole thing was simply a means of gaining the support of certain individuals who did not espouse the idea of owing alliegence to a temporal monarch. I don't even think this evolved into a political party; and am sure it's pretty much a dead letter anymore, except that it's probably brought up every time any change is proposed to the way the College is constituted or if anyone ever proposes a formal severance of the ties with European monarchs.

During the 19th century, the NAL's Parliamentary chambers had 5 thrones with moveable panels bearing the viceregal arms, so that the incumbent First Viceroy sat in the middle, with 2 thrones (one of them empty) on either side. After the Native Viceroy was added, the empty throne was moved to the edge of the dais; at the same time, however, it was accepted as the viceregal 'representative' of those provinces which could not or would not align themselves with any of the other viceroys. Its arms deliberately break the rules of tincture to give it a "separate", distinctive look and feel, appropriate for representing the imminent reign of God on earth.

It should be noted that the empty chair is not elligible for the rotational position of First Viceroy.