The adopted son of a prominent lawyer, Johnathan Gotlieb Penn attended the NAL Naval Academy and graduated near the top of his class. He had wanted to join the Army, but the quota of applicants was filled for that year. He served with distinction during Great War I when he rose to command of the T.M.S. Superior and won the Parliamentary Medal of Honor. However, he became famous during Great War II as the Supreme Commander of Arctic Fleet. Convoys there had suffered terrible casualties en route to Russia due to U-boat attacks, which he turned around in the course of just ten months. Many military historians say this was even more vital than it seemed at the time, when Penn becamed lauded as a miracle worker. This was also because he managed to deal with both Russia and New Francy successfully. He earned the affectionate nickname of "Cap'n Johnnie" during those years.

After the war, he was persuaded by the Conservative Democrats to run for the General Moderatorship. Urban legend has it that he agreed only upon the urging of his 95-year-old father, now a retired judge. The election campaign made wide use of his military nickname and he defeated the Whig candidate Thomas Dewey in a landslide. 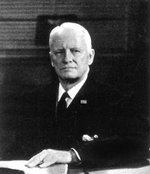 Exactly what his tenure in office might have been like must remain a mystery because a bout of pneumonia turned serious after barely a year in office. He weakened over the course of five months, retaining however a clear mind and accomplishing a surprising amount in reducing the national government's deficit. When he finally died, the grief was widespread and profound. Monarchs and heads of state from all over the world attended his funeral (creating a titanic security nightmare in the process).

He was survived by Edith, his wife of forty-one years, and two daughters.

He was also the last Conservative Democrat to be elected to the General Moderatorship before that party dissolved and was effectively absorbed by the Progressive Conservatives.