Te Pito O Te Henua is a small, proud island nation in the Southeastern Pacific. Henua civilization goes back a thousand years and can boast of achievements beyond most nations its size, including the colossal stone human statues called moai and a unique, homegrown system of writing, Rongorongo. Te Pito O Te Henua was one of the only Polynesian islands to successfully resist colonization by Europe or Japan, although it did spend forty years as a fully autonomous Japanese protectorate. Today, Henua is a uniquely Polynesian elective monarchy and an increasingly popular destination for tourists.

Te Pito O Te Henua means "Navel of the World/Land". Islanders call themselves Ñañata (sing. Tañata) Henua, "People of the Land", and their language Arero Henua, "Tongue of the Land". Most foreigners use the shortened name "Henua" to refer to the nation, people, and language. The modified word "Henuan" is sometimes heard, but considered improper.

Batavian explorers named the island Paaseiland, or Easter Island, because they found it on Easter Sunday in 1722. Many Westerners continue to call the nation by a translation of this name (Isla de Pascua in Castilian, Ile de Paque in French, Ostrov Paskhe in Russian, etc.). However, more Westerners are using the name Henua. In some circles, using one of the "Easter" names instead of Henua marks you as someone not familiar with the culture.

Most Polynesians outside Henua use the name Rapa Nui, given by Tahitian immigrants in the nineteenth century. This is to avoid confusion with other Polynesian people who use similar names for themselves (The Maori of Aotearoa, for example, call themselves "Tangata Whenua").

Officially the nation does not use any describing words in its name, but foreigners sometimes speak of the State or Kingdom of Easter Island, or even "Kingdom of the Easter Islands", referring to Henua and its tiny "colony" of Motu Motiro Hiva.

Henua is an elective monarchy that combines traditional and constitutional elements. Power is shared between the seven 'Ariki, or clan chiefs; the 'Ariki Henua, the "chief of the land" or king; and the elected Council of 21 Advisers, or 'Atua Hatu. This system, in which the clans share power and are constitutionally equal, differs from most Polynesian islands, in which one royal clan has a higher status than the others. The current system was introduced in 1808 after many years of civil war. It put an end to competition for power among the various clans and lineages.

Basis of the island's administration is the seven clans. Each clan has a home ahu, or shrine, but they are not geographical divisions as clan members are dispersed all over the island. Immigrants have historically been assigned to clans upon getting citizenship, but this is currently under debate. Henua's external colonies, Roaroa and Motu Motiro Hiva, have special statuses. Roaroa has an autonomous local government, while Motu Motiro Hiva has no permanent population (save occasional convicts) but is a royal preserve for seasonal fishing and hunting. 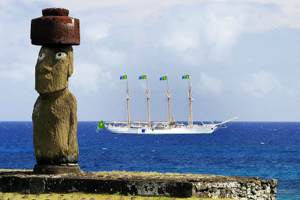 A XVIJth-century moai near Hanga Piko

Te Pito O Te Henua was settled sometime before AD 1000. Many features of the civilization emerged before 1500, including the moai statues and the beautiful petroglyphic art that became the basis for Rongorongo writing.

Overpopulation and waste nearly caused ecological disaster by the mid-sixteenth century. One king prevented this when he declared a tapu, or an exclusive royal right of exploitation, on many depleting resources, including nearly all of the remaining wood supply, all terrestrial birds, and many freshwater springs.

Growing clan rivalries led to a period of civil war in the eighteenth century, made worse by European diseases. The famous Birdman competition became the means for distributing political power. The annual Birdman rulers were incredibly cruel and wasteful, so in 1808 the seven Ariki, or clan chiefs, agreed to stop fighting and share power. Thenceforth, each Ariki Henua, or king, would be elected by the chiefs from a clan other than that of the previous king.

Slavers from the New Kingdom of Granada threatened Easter Island in the 1860s; the islanders successfully fought them off once. They turned to Japan for protection. The island was a fully autonomous protectorate of Japan between 1876 and 1919.

The nationalist King Hakapuna led many reforms in the 1920s-1950s. This included reforming rongorongo to make it easier to learn, instituting many democratic measures, and opposing colonialism internationally.

Since the 1970s, life on Henua has been defined by rapidly increasing tourism and immigration. Some of the powers-that-be in Oregon have taken an interest in Henua and are helping to reforest it. 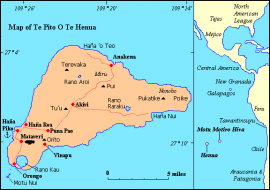 The central state consists of two islands, Te Pito O Te Henua and the tiny islet of (Manu) Motu Motiro Hiva (called Isla de Sala y Gomez in Castilian), 260 miles to the east. The Roaroa islands are 760 miles away and are a Henua dependency. Nearly all of the inhabitants live on the main island.

Henua is one of the remotest inhabited places in the world: the nearest landmass, Pitcairn Island, is 1300 miles to the west, and the coast of Chile is 2200 miles to the east. There are no defined land or maritime boundaries with other nations.

Henua's most important resources are culture, wind power, agricultural products, and wildlife, in approximately that order. Henua's culture and archaeological heritage have made tourism, particularly ecotourism, increasingly important. Rapa Nui Ecotours, Ltd. has become a major economic force on the island. It is jointly owned by the Henua government, some prominent Henua citizens (including three clan chiefs), and foreign investors from other Polynesian nations.

Henua is currently developing its underutilized wind resources. Given Henua's windy climate, the wind turbines, once completed, should be able to power every building and car on the island. Henua exports a few agricultural products, including pineapples, bananas, grapes, and coffee. Most export crops are grown by agriculture cooperatives based on co-ops organized by Japanese investors durign the protectorate period. Many Henua also rely on subsistence farms and sea life to some degree.

The barter economy has not left the island; many older people can remember the first time they needed to use money. As an intermediate stage between barter and money, Henua has a semiformal system of "traditional exchange media" consisting of cultural objects such as turtle shells and artwork that are used in a way similar to money.

The currency is the pa'una, a word derived from the "pounds" used by New England whalers in the nineteenth century. The pa'una is pegged to Japanese currency at the fixed rate of 4 pa'una = 7 lò. The exchange rate went unchanged between 1890 and 1993, during which it was set at 4 pa'una = 6 lò (2:3 rate). The currency was revalued slightly in an attempt to curb local inflation during a period of increasing tourism and demand for imports. Subdivisions: 1 pa'una = 12 peto (from the Castilian "peso") = 120 vunu (from the Japanese "fun").

One interesting coin is the mo'ai, an 800=pa'una coin with an image of a mai statue painstakingly carved from obsidian This coin derives its value from the quality of the artwork as well as its store of Japanese currency. Actual obsidian mo'ai have not been made in decades, but mo'ai, half-mo'ai, and quarter-mo'ai notes continue to be printed in small quantities every few years.

Everyone is proud of their culture, of course. The Henua have particular reason to boast. Sitting on the fringes of Polynesia, they have reaped the benefits and curses of isolation and come out the stronger. They are immensely proud of their native civilization, their unique written language, and their unconquered, uncolonized status.

The Henua are known for being fun-loving and competitive. A Henua considers it a virtue to be able to make jokes during times of adversity or even tragedy. Henua has a long tradition of literacy and scholarship; indeed, literacy is the basis for citizenship on the island. In 1990, the Education Advisorate realized its long dream of a university of higher education on the island, taught in Arero Henua and using texts in Rongorongo. The Hare Nui te Hangaroa operates as a branch of the University of Pape'ete.

The traditional faith is the state religion. Although participation in traditional rites is expected of all citizens, they are free to adhere to other religions.

Henua has one radio broadcaster that airs two separate stations: Ratio Te Pito, aimed at adults, and Te Re'o, aimed at youth. Henua has no television. Movies have become popular since the Eighties, when an enterprising group founded a studio to add Arero Henua subtitles to foreign films. Henua has only one newspaper, Te Vaka Ama (The Outrigger).

The national language is Arero Henua. Other than some recent loan words, it is essentially the same as the historical language *here* called Old Rapanui. Here, modern Rapanui reflects the massive changes to the language caused by a nineteenth-century attempt to evacuate the islanders to Tahiti. The expats and came back home with a language heavily influenced by Tahitian.

Rongorongo, Henua's unique native script, emerged in the late eighteenth century after the island's exposure to European writing. An unknown innovator developed a script using symbols from Henua rock art. The script was used mostly for religious texts, myths, and incantations. The system was quite intricate; some glyphs stood for syllables, others for words, others for groups of words. Indeed, the scribes (tuhunga ta) were always making it more elaborate so that commoners would not be able to learn it.

Modern Rongorongo was devised in the 1930s by order of King Hakapuna. It is a syllabic script like Cana. It may be standardized so that syllables beginning with the same consonant sound are represented by similar graphemes.

The moai statues are the most recognizable part of Easter Island's culture. As time has gone by, styles have changed, but they remain an important symbol of royal authority and of the Henua people.

Henua's ISO code is he, represented by a single Rongorongo glyph resembling a backward numeral 3. Henua's license plate sticker has the "He" abbreviation in Rongorongo, Cana, and Latin writing.