The Grossartige Allianz was a temporary alliance of convenience between the Holy Roman Empire and Russia at the beginning of the Second Great War. 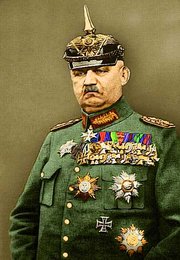 The Holy Roman Empire had become the most powerful country in Europe. This made it particularly interesting for the frustrated SNOR rulers of Russia, who desperately needed some success abroad to justify their not-too-popular interior policy. In 1936 they formed an alliance with Germany, the Großartige Allianz. Other countries joined the German-Russian axis as well; Greece had been itching to move East and go to war with the Turks since the collapse of the Ottoman Empire in 1922, and in 1936, encouraged by the Germans and then allied with them, it finally did so. Hungary, out for revenge for its painful defeat in Great War I, joined the Allianz in 1937, followed in 1939 by Ukraine, Belarus, and the Danubian Confederation. 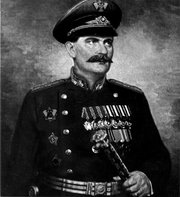 In March 1939 the Russian leader Vissarionov concluded a secret treaty with Germany, that become known later as the Lipov-Von Korff Treaty. Central and Eastern Europe were divided into two spheres of influence: a part where Germany could do whatever it wanted without Russian interference, and vice versa. A first effect of this treaty was the annexation of Bohemia by Germany: a pro-German coup in the Bohemian Kingdom on 2 April 1939 resulted in Königreich der Böhmischen Kronländer, which then requested and received full incorporation into the HRE. (3)

Despite the significance of the preceding events, they were mostly neglected and ignored by the Western powers. This would finally change after five months: on 1 September 1939, Germany attacked Veneda on 1 September 1939, and slighly more than two weeks later, on 18 September, Russia invaded Lithuania. In response to these invasions, the Allies (the Federated Kingdoms, France, the Italies) formally declared war on the Allianz, although initially it did not come to any fightings. This marks the official beginning of the Second Great War.

By the end of October, both Veneda and Lithuania were conquered (Lithuania was conquered in the so-called Thunderstorm War). Subsequently, Russia launched an attack on Nassina on 3 November (4), and by June 1940, Nassina, Estonia and Latvia were conquered as well. In 1940, Germany had equally little trouble rolling through Batavia and Jervaine: both were conquered in a few days, immediately after which Germany moved on to France. By the end of the year, most of Northern France (Francie) was occupied. In the same period, Oltenia and Muntenia were conquered and annexed by Hungary, and Moldova by Ukraine.

Initially, the Großartige Allianz proved successful. By 1941, it had most of Europe under its control, and China - not officially a member of the Allianz but allied with it anyway - was making similar progress in the Far East.

Two factors would eventually determine the final defeat of the Allianz: mutual distrust between Russia and Germany that would cause a split in the Allianz and finally escalate into a war in 1943, and Germany's failed attack on Scandinavia.

The first signs of a split in the Allianz became visible in 1941, when the Danubian Confederation withdrew from it after some generals had removed the prime minister and abrogated the treaty. This annoyed the Allianz, and soon Germany, Hungary and Greece invaded with Russian support. The Danubian Confederation did not stand a chance; it formally ceased to exist, and in its place several smaller puppet states were established, one of which was the Independent State of Croatia, led Ante Pavelić. This Croatia was rather, or very, fascist, more so than any other member of the Allianz; the Ustaša doctrine regarded all Slavs as subhuman (holding that the Croats were actually Goths who had picked up the language of the local Slavs), and this view clashed heavily with the new snorist regimes of the Kingdoms of Bulgaria and Serbia, which had factually become Russian satellites. As tension between the Croats and the Serbs grew, mutual distrust between Russia and Germany grew with it. By 1943 the Allianz had factually ceased to exist, and in its place two camps stood diametrically opposite each other: Russia, Ukraine, Belarus, Serbia and Bulgaria at one side, Germany, Hungary, Croatia and a half-hearted Greece at the other. When Russia and Serbia finally invaded Croatia, it took Germany less than a day to respond: from Veneda, it launched a massive attack against Russian-occupied Lithuania, and from there rolled quickly into Belarus and Russia proper.