The Thunderstorm War is the name attributed to the minor war that took place in September and October of 1939 in Lithuania when it was conquered by Russia. The name is most often attributed to the fact that the night it began a large thunderstorm struck Vilnius and strong winds buffeted most of the country; pagan Lithuanians associated it with the wrath of the gods. Although "Thunderstorm" is incorrectly translated from Lithuanian, it has become the name of the war in English.

The Thunderstorm War can be considered to a series of battles in the Second Great War. Some historians argue that this did not occur during the course of the active war, and should be treated separately. It is because of this ambiguity that it maintains its title.

Throughout the 1939 Russia, Belarus and Ukraine continued the pressure on Lithuania for its alleged mistreatment of Slavs; several protests were organised, and Lithuanian embassy stormed in Smolensk; public opinion was also formed by propaganda of state newspapers. After the event in Smolensk, Lithuania stopped official diplomatic relations with Belarus. Relations with Russia and Ukraine were strained as well. Since the First Slavic uprising in 1936, Lithuania had the official stance of emergency declared; due to the aggressive actions of Russia, it was believed that war would most likely happen, but despite official brave speeches, the foreign minister of Lithuania attempted to avoid war; it was believed that Germany, despite of being in the same alliance with Russia, would not permit the Russians to attack Lithuania due to the fact that then the equilibrium of powers would switch; it was not known (outside of rumours) for the Lithuanian officials about the secret treaty signed in 1939 which gave Lithuania to Russian sphere of influence, while Veneda - to German one.

In September 1st of 1939 Germany invaded Veneda. Among the reasons why Russia did not invade Lithuania at the same time was that Russia, in case its and Germany's ways would go at different directions, wanted to be able to blame Germany as the aggressor of the war and state that occupation of Lithuania was necessary for the safety of western borders.

In 3rd of September 1939, prime minister of Lithuania Antanas Smetona, due to the invasion of Germany to Veneda, issued a decree of partial mobilization, which increased the army size of Lithuania to about 250,000. The martial law was already declared due to disturbances in the Slavic lands.

During a special meeting of seimas and the government the strategy for possible defensive war against Germany or Russia was approved after lenghty discussions (it was decided on how to avoid some tactical flaws which made high looses for Veneda initially), however the real possibility to stage a defensive war was doubted if both enemies would strike. Secret plans for evacuation of government into Naujojo Vilniaus apskritis (Maasai) or New Lithuania were discussed.

In the next few days Russia, Belarus and Ukraine moved army close to Lithuanian border. The ambassadors of Lithuania to foreign countries tried to seek for support and find out more about the official stance of those countries. Minister of foreign affairs went to Germany, still believing to convince it that Russian occupation of Lithuania would harm the German interests; however most of Lithuanian leadership already imagined that there might have been a secret pact.

Lithuania as well stationed troops in the eastern border, however also leaving some in the west, in case the Germans would also strike at the same time. Lithuanian Air Force was kept in the air constantly, due to the fact that Venedic air force was decimated on the ground by the Germans.

Several incidents, probably organised by Russia and its allies, happened in Lithuania. In 9th of September, Slavs, under suggestion of their leaders, declared a strike, which paralysed the eastern and southern parts of Lithuania. Augustinas Voldemaras suggested to issue a decree permitting to shoot all the strikers, however Antanas Smetona understood that this would lead to a civil war and Russian engagement. The first battles happened in streets of eastern cities and some of these cities were overtaken by Slavs; some Lithuanians were killed in these events, including policemen and soldiers.

September 13th is considered to be the beggining of Second Slavic Uprising, most likely organised by foreign forces from the east. Iron Wolf movement requested action and government sent some army to quell the Slavs (it was this day when Antanas Smetona allegedly left continental Lithuania for New Lithuania). After this, Russia, Belarus and Ukraine issued ultimatum to Lithuania requesting to permit their troops to enter the country "to defend the Slavs".

Lithuania, after a lenghty discussion, rejected the ultimatum. The Thunderstorm War began. 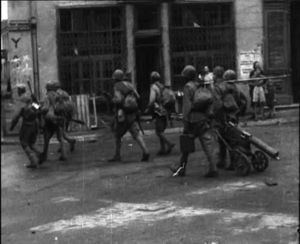 Forces of Russia, supported to some extent by Belarus and Ukraine, invaded Lithuania. In the eastern Lithuania, the local Slavs were largely supportive to the invaders and therefore the invaders met little resistance. Lithuanian army divisions stationed in the east, which already took damage from some Slavic terrorist attacks and sabotages, did not put up a good fight and after about a week started retreating on official orders. Russian dirigibles started to bomb Vilnius and Kaunas, but the Lithuanian air force managed to shoot down many at the start using modern ANBO-12 anti-airship fighters. The bombings were stopped for a brief period, but were continued after the eastern part of Lithuania was overtaken. At the approximate line of Lithuanian ethnic zone, the retreating Lithuanian army from the east united with the one that had been stationed in the west and took fortified postions. It took the invaders several days to breach this line, but with airship support and many of the Lithuanian anti-airship fighters already destroyed, this was done. Lithuania was requested unconditional surreder, but Voldemaras refused. The bloodiest part of the war started when Russians entered the lands inhabitted by ethnic Lithuanian majority; several sabotages against Russian troops were done by the locals and some troops were killed, as well many technics destroyed. However, despite the large casualties, Russians had even more troops and so they moved on. They overtook Balstogė (after a battle) and Gardinas (without a battle as the Lithuanian army retreated northwards to Vilnius) in mid-October. The Battle of Vilnius, one of the fiercest battles in this war, took place in 20th of October; after a few days of artillery barrage Vilnius fell. After that, Lithuanian army was decimated and was unable to put up any considerable resistance, the only more serious battle after the Battle of Vilnius took place near Kėdainiai. The government of Lithuania retreated to Courland and later flew off to New Lithuania. Courland had declared neutrality by then. By 30th of October, Akmenė, the last town of Lithuania, fell. Although there was some resistance, after the tortures and rapes reported from Vilnius, many people did not dare to resist openly. Iron Wolf movement did that but was destroyed relatively quickly; Augustinas Voldemaras was also arrested and executed and so were some other members of government. Later, the well-planned Resistance of Lithuania, led mainly by the Brotherhood of National Honour of Kazys Škirpa, started.

Throughout the late September and early October evacation of people to Naujojo Vilniaus apskritis and New Lithuania was organised. This was done by airships of the national carrier Lithuanian Airlines. Naujojo Vilniaus apskritis was generally the preffered destination because it would be easier to accomodate a large influx of immigrants near the equator than in Antarctica (no need for heating, availability of food and construction material for new buildings as well as larger workforce). Only some rich people were able to flee to New Lithuania. Generally a priority was given to evacuate former government servants and other people that could be targetted by snorist occupational authorities. The Russians and their allies generally did not obstruct this evacuation understanding that there would be less problems if these people are evacuated but several airships were still shot down killing several hundred refugees. Overally about 30,000 people were evacuated from mainland Lithuania during September and October. These number include several thousand Slavs (mostly former government workers and anti-Snor activists who would have been targetted by the Russians and their allies as collaborators).

The center of Naujasis Vilnius after the bombing of December 3rd, 1939

The war officially did not end however, despite of the fact that the mainland Lithuania was conquered; the Naujojo Vilniaus apskritis in Africa and New Lithuania in Antarctica were still left untouched.

The reason why Smetona retreated to New Lithuania rather than Naujojo Vilniaus apskritis was because it was presumed to be safer there (no local Slavs, hard and costly to conquer for the Russians due to climate and distance). Russians actually planned the capture of it during next February or March as they did not see much danger in the minor colony staying there, although they led unsuccesful talks with Scandinavians on trying to get Scandinavians to capture New Lithuania.

Russia, under pretense of freeing their oppressed Slavic brethren, but with the real intent of establishing a Russian base of operations in Africa, launched an invasion force against Naujojo Vilniaus apskritis. The invasion to Naujojo Vilniaus apskritis, then still ruled by General Povilas Plechavičius (who was assigned to rule the place after the Maasai Uprising), was planned for late November. However, the operation failed miserably due to sabotage attacks on the Russian Navy; Russia lost many ships as well as many troops. This is reffered to as the Disaster of Indian Ocean and was officially blamed on "Lithuanian bandits" by the Russian government. It is more likely however that sabotage was carried out by the Chinese, who, although officially were not hostile towards Russia (and did not want the hostilities to start), had no interest in having a Russian colony near their Chinese East Africa; they expected to take Naujojo Vilniaus apskritis for China eventually. Some other theories blame the Ethiopians for the sabotage.

Although some Russian troops, supported by dirigibles, managed to reach the coast and capture several coastal towns, they were defeated in about a month and, although cities of Naujojo Vilniaus apskritis were damaged by bombs, it was almost impossible for Russians to organise a new invasion on time, and besides they had more important things to do in Europe in the 1940. Therefore, a deal was signed in February of 1940, under which Russia signed peace treaty with Naujojo Vilniaus apskritis, in exchange for Naujojo Vilniaus apskritis officially declaring independence from Lithuania and as well declaring neutrality. Both sides agreed with the terms and the new state was named Pakštuva after Kazys Pakštas.

This was the end of real actions in Thunderstorm War. Although the state of war still existed between Russia and Lithuania (which now consisted only of towns of Smetoniškis and Voldemaravas in Antarctica), Russia did not have the will to pursue any real actions and was preoccupied with the war in Europe; as well, after the neutralisation of Pakštuva, other countries of the world and overseas Lithuanians supported the people in New Lithuania by weapons and other means). After the revolution in New Lithuania this dwindled into obscurity even more.