Armand Beauvais is commonly recognized as the father of modern Louisiannan government. Beauvais is often seen as a wise founder, although there are many detractors.

Armand Beauvais was born in Point Coupée Parish (later Arrondissement) on Sept. 6, 1783, the youngest child of Pierre Charles St. Jaques Beauvais and Marie Françoise Richer. His childhood was spent in this parish.

In An XIV (1806) Beauvais purchased 11 arpents on the Mississippi from his mother, the beginnings of his plantation. Four years later he was appointed a Justice of the Peace for the Parish by Le Consulat Louisiannais.

The following year he was wed to Louise Delphine Labatut of New Orleans. While children were not immediately forthcoming, a child was born following the Summer Revolution, where Le Consulat was overthrown and a new constitution was instituted for the nation, resulting in the highly decentralized oligarchic form we have today.

As part of this New Beginning, Beauvais took the role of Premier Président. The position was originally to be a Prime Minister, a leader for the nation who held nearly absolute power, an idea which Beauvais detested, seeing the control exerted by Napoleon. He quickly moved to divest power, creating a ruling council wherein he represented the will of the common man and where he met with Prefects from each Prefecture (Saint-Louis, Saint-Onge and Le Territoire de L'Osage).

While these meetings were originally viewed as informal, they were quickly codified into the constitution, divesting the power from the central authority to local leaders who were responsive and responsible to their electors.

In the Sans-Culottides of XLV Beauvais announced the convocation of a National Assembly, to create laws for the nation that transcend the Prefectoral boundaries. The Parliaments of the 3 Prefectures railed against this idea and a National Constitutional Convention was called. 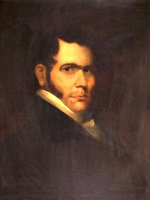 A portrait of Armand Beauvais.

Much to the Parliamentarians dismay, the delegates from the Parishes voted in favor of a National Assembly, with limited law-making abilities, comprised of representatives elected both by the Parliaments and by the local electorate.

In the summer of XLVIII (1840) after a year's discussion with the National Assembly the Capital was moved from Baton Rouge north, to a developing city on the banks of the Mizouri. Further upriver the great trading city of Lyons-sur-Mizouri was already thriving. A large grant of land was set aside and a great and marvelous capital planned.

This was both a move to centralize the capital and encourage growth of the interior which many in Louisianne felt was being eyed by NALien, Tejan and Alta Californian interests. To discourge the thoughts of conquest the capital was moved and the breadbasket of Louisianne was born.

It was to this new capital that Joseph and Hyrum Smith and others of the leadership of the Mormon church came to discuss redress for the wrongs perpetrated against them, and where they were slain by assassins.

Armand Beauvais was greatly moved by this tragic loss of life and spent his remaining years as First Président working for the liberation of all slaves within the bounds of the nation.

At the end of his time as leading the fledgling nation, Beauvais returned to the land of his heritage, beginning in Brumaire of an LV to maintain the large plantations that his family had amassed over the years. He enjoyed his land a scant ten years and in an LXV died quietly. To this day the Beauvais Plantation remains a beautiful example of the Golden Era of Louisianne.