New Dalmatia is an autonomous territory of the Republic of Dalmatia, receiving this status following the islands' abandonment by Russia. The territory's internal affairs are handled by the Territorial Council based in the territorial capital, Czieta da Nikola Tesla; the Territorial Council is formed of Councillors elected every four years, with each Regional District having five Councillors. Foreign affairs are handled by the Dalmatian Ministry of Foreign Affairs in Raguza, though New Dalmatia does field its own "national" sports teams at some international competitions. As an overseas, semi-autonomous territory of Dalmatia, they are an Associate (non-voting) member of the Community of Dalmatophone States.

The islands' defence is jointly provided for by the New Dalmatian Territorial Defence Corps (ND-TDC) and the Dalmatian Air Force and Navy; the local gendarmerie is a section of the ND-TDC.

The Dalmatian Navy maintains a base at Striala Nordeska, which also serves as Headquarters of the Northern Fleet. Presently, a cruiser group (1 cruiser, 2 destroyers, 2 frigates + support vessels) present in the islands at all times on a 6-month rotation, and all three of the Navy's icebreakers are stationed in ND. The vessels currently assigned to the Northern Fleet are the cruiser Admiral Severesku (K-843, Admiral Severesku class), the destroyers Airesku (D-660) and Liaroator (D-705, both Nesupiarabilu class), the frigates Ceautu (F-693, Raguza class) and Bosna (F-883, Kozara class), along with one ammunition ship, one oiler, four tugs and the three icebreakers. A naval base is presently being built in the harbour of Czieta da Nikola Tesla, which will be large enough to accomodate an aircraft carrier group centred on the Aurial Vlaiku. The carrier's air element will then serve the second function of providing air defence of the islands. The base at Striala Nordeska will continue to be used as the home port of the icebreakers, and the coast guard ships operated by the ND-TDC. The Navy also maintains a base at Aurelius Rex, which is the home of the 2nd Flight of the 784th Anti-Submarine Helicopter Squadron and a one-aircraft detachment of the 72nd Maritime Reconnaissance Flying Boat Flotilla (which is home based at Troagur in Dalmatia).

There are civilian heliports in all major towns, and to these are deployed the helicopters of the ND-TDC. A makeshift airstrip was constructed at Striala Nordeska in 2007. Although capable of handling fixed-wing aircraft, none have been deployed there except on temporary duty during exercises; the only unit permanently assigned there is the 712th Air Cavalry Squadron of the Dalmatian Air Force, which operates attack helicopters. At present, this is the only permanent air force presence in the islands.

Joint exercises between the ND-TDC and the Dalmatian military are held periodically; the most recent was held in July, 2009, in which the air complement of the carrier Aurial Vlaiku undertook a one-week exercise together with a detachment of Naval Infantry and the ND-TDC. The air unit was split into two units: the Aggressor (with a flight of Falkoana prop-driven fighters) and the Defender (with a flight of Spretu-N jets). The Naval Infantry played the Aggressor role on the ground, and the ND-TD played the role of the Defender, in an exercise designed to give the TD some experience in defending against an amphibious assault.

Franz Joseph Land was colonised by Austro-Dalmatia. At the collapse of the Austrian Empire the population was around 2000, most of whom were brave pioneers. However there were a few shipments of radical Dalmatians who were exiled there by the Austrian government. The colony was basically self sufficient with an economy similar to Iceland's (ie fishing), so the majority of the population was poor. However, they were a prideful lot too, and the current population is just over 10,000. During the colonial times a good deal was invested in the islands because they were viewed as strategically important, and it was there were the first Tesla-type Static-Electricity-Collecting powerplant was put into service (initially on a test basis; Nikola Tesla himself spent three months there). This is still operational and provides free electricity to the populace, in turn providing heat and light etc.

Following the collapse of Austria and the victory of SNOR in Russia, the Russians occupied Franz Joseph Land and incorporated it into their territory. Interestingly, they didn't interfere much with the inhabitants, which allowed them to keep the Dalmatian language, though the dialect spoken there now has a good deal of Russian influence (mainly loanwords) and is written in Cyrillic. The Russians never really did much with the islands apart from operating a few meteorological and other scientific research stations. Russia did supply the islands with various goods and the fisheries were nationalised, meaning the Dalmatian fishermen were paid from a central company in Moscow (or elsewhere?). After the fall of the SNOR the people didn't receive their salaries anymore and the delivery of goods from Russia ceased completely, resulting in hunger and poverty and the population of the islands turned to Dalmatia for assistance. Dalmatia did and continues to supply aid to the territory (since renamed to Noa Dalmatia, "New Dalmatia").

New Dalmatia is an archipelago. 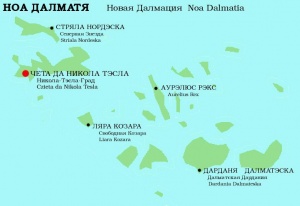 New Dalmatia's economy is based almost exclusively on fishing

Though Dalmatian, the descendents of the original Dalmatian settlers developed a unique culture of their own due to the decades spent under Russian domination and isolation from Dalmatia, which was a member state of the CSDS; the CSDS being one of the archrivals of Russia, there was no contact between the New Dalmatians and Dalmatia proper until the fall of the SNORist regime.

The official language of New Dalmatia is Dalmatian. However, the local dialect differs from standard Dalmatian and the dialects spoken in Dalmatia and Dalmatophone Africa, due to significant influence of Russian (primarily in the form of loanwords, though some grammatical elements have also been absorbed from Russian). In New Dalmatia, Dalmatian is written in the Cyrillic alphabet. This is provided for by legislation passed in 2000, following local resistance to the introduction of standard Dalmatian orthography.

There is no official religion. During Russian occupation, Russian Orthodox was the official religion, though because the Russian central government paid little attention to the islands, Catholicism survived as the major religion.

By far the most popular sport in New Dalmatia is ice hockey, but bandy, handball and basketball are also played; hibercrosse was introduced to the islands in 2004 and has a small but hardcore following. The territory fields its own sports teams in international competitions (Olympics, etc) - with the notable exception of Ice Hockey: Dalmatia is a member of the International Ice Hockey Federation since 2005, but 85% of the registered players were born and live in New Dalmatia (in fact, there are only five clubs in Dalmatia proper; two in Metlika, two in Agram, and in the summer of 2009, the first ice hockey club in Czieta da Saray was established, to enter competition this winter). New Dalmatia has its own championship, separate from the smaller one in Dalmatia proper (there are 9 clubs in New Dalmatia that qualify as semi-pro and take part in the league, in addition to many recreational clubs), though since 2007, there is an All-Dalmatia Cup, which is a one-game contest between the ND and the Dalmatian league champions, which the New Dalmatian team has won every time so far. New Dalmatia was formerly an IIHF member (from 2002-2005), but when Dalmatia made its application, Raguza pressured the territory into withdrawing, the ND hockey authority telling the IIHF in the official statement that Dalmatia is a single unitary state with non-autonomous administrative divisions, and requesting that the Dalmatian Ice Hockey Federation be given ND's spot. This was done, and the Dalmatian National Ice Hockey team is essentially what was the New Dalmatian team - this past Division III world championship team was the first to have a non-New Dalmatian player on it: goalkeeper Ivan Belicz of Dinamo Agram.