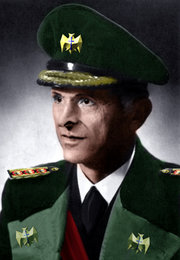 Ion Onătescu (1912-1979) was the right-hand man of Petru Gheorghe Maurer, was intrumental to raising him to the heights he achieved. By all accounts the men were genuine friends. After Maurer's death, Onătescu regularly visited his grave and even paid for the upkeep of a church on condition that prayers were offered for the soul of the former Lord Protector. Yet it was Onătescu who master-minded the coup which brought his friend low.

Such was a hint of the complexity behind this figure. Unfailingly polite, Onătescu studied to be a priest yet became an army officer instead. He proved a natural at intelligence, which came in handy during the Second Great War because his mother was Hungarian. Once the war was over, he joined the fledgeling secret police of Oltenia and began a meteoric rise. When the secret police evolved into the infamous Securitate it was Onătescu who was a key player in that process and served for five years as its Chief Direktor. In that post, he restructured the organization, personally designed many insignia and established policies of precision terror aimed at dissenter.

By all accounts, both as he rose and during his tenure as dictator, he was never cruel but extraordinarily ruthless. At attempt at forming a labor union in 1966 was stopped simply by the expedient of having army units sans insignia break into the homes of the leaders and cut off the head of everyone in the house, regardless of age. Two of the victims were newborn babies. Three were children under the age of ten. Two more were in their seventies. In all, seventeen people were butchered. But no other reprisals were aimed at those who had flirted with or even joined the fledgeling union. Of course, they ceased all such activities from that moment on (which was the point).

This absolutely ruthless man took the time in the middle of his rule to woo and eventually wed a woman ten years younger than himself. He and Erzebet Pacepa (1925-1991) married amid considerable festivities in 1970. Their betrothal and the marriage ceremony were publicized widely, and helped put a human face on the much-feared dictator.

Another factor in the respect with which Onătescu came to be viewed was the way he dealt with Muntenian dictator Gheorghe Milţeanu. The two constituent states of Romania had generally had very good relations, however Milţeanu beleived Muntenia clearly the "senior" of the two and demanded treatment as such. He evidently based this on the fact that Muntenia achieved independence first, had helped Oltenia achieve independence, and that Muntenia had a king while Oltenia was a principality. Onătescu in relations with Muntenia's ruler was perfectly polite but never subservient. He also made a point of organizing wargames between the two nation's militaries, in which the Oltenian Air Corps demonstrated just how effective it could be should circumstances arise. This, coupled with the brutally efficient way in which those suspected of spying for Muntenia were punished (given crude lobotomies to cure their "obvious insanity"), evidently persuaded Milţeanu this was one area where he could only press his luck so far.

Upon his death from heart failure in 1979, there were those who went into genuine mourning. Others of course, did everything but dance in the streets. As per his instructions, he was cremated and his ashes given to his widow. Upon her death, both their ashes were scattered in the River Olt.

Onătescu remains the epitome of what was considered right and wrong with the Regime he helped fashion. It is beyond doubt that the White Regency succeeded in modernizing Oltenia, which had been struggling with a pre-industrial economy since independence. As a direct result of Regency reforms, literacy and college education increased by at least two hundred percent in fifty years. The nation's military was modernized, and Oltenia itself--while continuing in orbit around the massive Russian Empire--regained control of most of its internal affairs by 1960. On the other hand, conservative estimates indicate that at least 45,000 individuals were murdered by the state in that same period. Torture and repression were facts of life, and suicide was often considered a better alternative than imprisonment at the hands of the Securitate, which deliberately employed individuals diagnosed as psychopaths and sexual sadists as prison guards. Onătescu himself took great pride in advances made by Oltenia, while never blinking at the price his country paid to achieve it under the reign of the White Regency.