The Securitate (Romanian for Security) was the name given the secret police forces in Oltenia and Muntenia during the Snorist era.

The Securitate(official full name Departamentul Securităţii Statului, State Security Department), was the secret police force of Oltenia. It had a very bad reputation and accusations of association with it are considered extremely serious in Oltenian politics.

In general the Securitate was divided into six Departments: 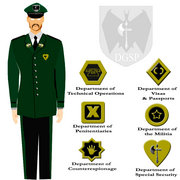 uniform of the Securitate

Althought technically the organization that became known as the Securitate was formed at the end of the Second Great War, it did not begin to take its most-famous form until Lord Protector Petru Gheorghe Maurer appointed his protoge (and eventual successor) Ion Onătescu to become its Chief in 1958. It was Onătescu who re-organized the department and standardized its methods. These included a vast improvement in legitimate law enforcement, using increasingly modern techniques. Under Onătescu's administration, for example, forensic pathologists received far more training and authority. Weapons and their use were standardized. He also redesigned the departmental insignia. 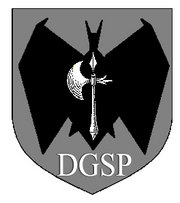 The other side of Onătescu's influence the a vast expansion of the Special Security department, whose activities were designed to inspire genuine terror. Whereas Special Security had always been issued machine guns, for instance, he made sure they had armored vehicles and anti-tank weapons. But the real terror lay in what were dubbed "Extraordinary Operations Squads," whose memberships were considered top secret. These squads were responsible for intimidation of the regime's enemies. Among the methods used were murder, rape, arson, mutilation and simple assault.

It was the Special Security Department which allowed Ion Onătescu to topple his mentor and friend in 1968, taking his place as Lord Protector.

With Onătescu's death in 1979, Securitate operations took a turn for the worse. Under Istvan Gheorghiu the organization, which had been at least aimed only at those who actually did oppose the White Regency and/or the SNOR, now targetting anyone who earned the new Lord Protector's dislike. In an effort to prove himself loyal to Russia Gheorghui persecuted all religions other than the Orthodox Church. He also had a personal paranoia regarding Mormons and Xliponia. More, to make sure Muntenian dictator/king Gheorghe Milţeanu saw Oltenia as an ally rather than a threat, he implemented many of Milţeanu's persecutions as well. As a result, eight years of Gheorghui's rule created ever-increasingly desperate and active enemies of the Regency, as well as bitter feeling toward Muntenia that continues to this day.

The Princely Restoration was accomplished at least partially with the active aid of many members of the Securitate, including even the Special Security Department.

In 1990 the Securitate was officially disbanded, with its purely police functions taken over by the Oltenian Police Force, which replaced the feared green and grey uniforms with light blue uniforms of a totally different design.

Romex, this is for you.