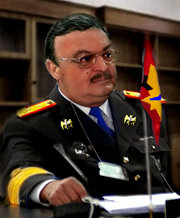 Istvan Gheorghiu (1929-1987) was the least popular Lord Protector of Oltenia, which is actually saying something. An early air corps officer who then entered the diplomatic service before becoming a magistrate, he was widely considered a "yes man" with some talent. Ion Onătescu elevated him to membership in the White Regency in 1970 as part of a scheme to increase the Council's membership with individuals loyal to Onătescu personally. Grossly overweight, he was also something of a clothes horse and for this reason among others wasn't really taken seriously, although his general competence at the tasks he was given few questioned.

Warning signs--such as his wife's suicide in 1961, or his accidental killing a man during a boxing match in 1950--were not noticed.

Upon Ion Onătescu's death, Gheorghiu was selected as a good figurehead for the Regency and that was all he was expected to be. Three other senior members of the Council--the chiefs of security, propoganda and industrial planning--expected to wield real power as a triumvirate. 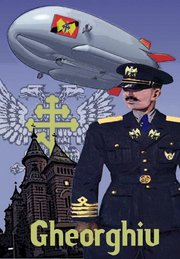 Within a year, all three were arrested for treason and executed. Gheorghiu fawned on the Russian overlords from which the rest of the Council had sought at least some independence, and in doing so won increased SNOR support. He converted to the Orthodox faith and began a low-key persecution of most other faiths. Some, however, got much worse attention. Non-Christians in particular were targets of his ire, so Jews, Muslims and others suffered under his rule.

He unleashed the Securitate against his personal foes and bete noirs (among them, Freemasons and Mormons and for some reason all things Xliponian--books in that language were banned). Whereas his predecessor had used terror as a precise instrument of control, Gheorghiu used it as billy club very nearly on a whim. In the process he also lived an extremely lavish lifestyle while trying to foster a cult of personality. Pictures of Gheorghiu appeared everywhere, from money to stamps to every single schoolroom in the country. But his cutting back on infrastructure and neglect of the military while increasing taxes branded him in everyone's mind as a disaster. The ocassional lavish public spending--such as the restoration of Timişoara Cathedral--did little to assuage the general dissatisfaction. That he routinely appeared in a military uniform (having left the service at age twenty seven) was met with disdain--but only behind his back.

As arrogant as he was with his Oltenian fellows, Gheorghui was all-but-craven towards the Russians (upon whom he depended) and also towards the Muntenian dictator Gheorghe Milţeanu (aka "King Gheorghe I"). Another reason Gheorghui was despised.

His death at age 52 was reported to be from heart failure, but rumors persist that he expired either as result of a drug overdose or via an assassination. He had had planned an elaborate tomb for himself in Timişoara, but it was never completed. Instead, an obelisk was placed atop his grave.

Following the princely restoration, his grave became the object of various desecrations including graffiti. In 2000 the government moved his body to be interred at a secret location and demolished the obelisk.