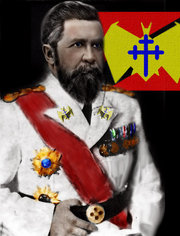 Petru Gheorghe Maurer (1901-1969) was the second leader of the SNOR puppet government of Oltenian dubbed the White Regency. He was almost certainly the most influential. During his tenure in office, the Russian occupation of Oltenia came to an official end, much of the country's infrastructure was repaired and the beginings of the Oltenian Air Corps were realized.

But it is also true that Maurer tried to foster a cult of personality around himself, towards which he created the Securitate, a secret police composed almost entirely of Hungarians. Being half-Serbian himself, he carefully disassociated any Serbians from the most unpopular aspects of the regime while fostering stronger and stronger distrust of Hungarians.

Ultimately, he was deposed with the tacit support of Moscow. He was allowed to live in the equivalent of house arrest and when he died of liver cancer he was buried privately.