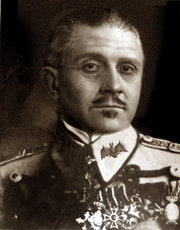 Viktor Anotonin Ionescu (1882-1953) was an Oltenian army officer who fought with distinction against the Prussians in the Second Great War, but did so after openly allying himself with the SNOR invaders of his native land. Ultimately this meant elevation to the position of Lord Protector, the official head of the Oltenian Regency Council (aka the White Regency).

"Lord Protector" was a mostly-ceremonial position while held by Ionescu, a native Oltenian who could be seen leading the efforts to rebuild the country and broker some kind of fair succession to the principality. It would be inaccurate to claim Ionescu was simply a puppet, as was often enough the accusation, but his genuine authority was limited and the real leadership of the Regency resided (at first) with the Russian Advisors who commanded the occupying troops.

Ionescu died due to complications from a perforated ulcer in 1953. The Regency made his state funeral a grand affair, and built a monument to him in downtown Timişoara. That monument, a statue of Ionescu in full uniform held aloft by two eagles and two bats, was destroyed by rioters in 1988. His body was exhumed from its resting place in 1993 and re-buried in his home town of Bacău.

Viktor Ionescu is a distant cousin of the later Chancellor of Oltenia.