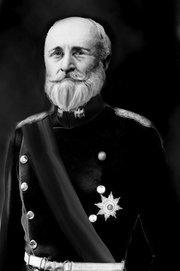 Mihai Pauker-Dej (1889-1968) was a veteran of the uprising with gave Oltenia its independence from Hungary. He later collaborated with the SNOR-backed White Regency, out of a sense of loyalty to the Oltenian chain-of-command rather than any ideological solidarity. A competent administrator, he rose eventually to Army Chief of Staff.

After the coup which brought Petru Gheorghe Maurer down, Pauker-Dej was selected as Lord Protector. Elderly and unfamiliar with the highest corridors of power, he was literally a figurehead. The Securitate and its head Ion Onătescu were the true governors of the nation. When Pauker-Dej died of congestive heart failure in 1968 his state funeral was lavish, while the Securitate chief managed to make himself the Lord Protector--absolute ruler of Oltenia in name as well as power.

Pauker-Dej was a life-long bachelor.