Flag of the Baltic League

The Baltic League, one of the modern descendants of the ancient Hansa, is made up of the Republic of the Two Crowns, the Free City of Danzig, the Principality of Skuodia, the Kingdom of Latvia, the Kingdom of Estonia, the Nassland, Finland, Sweden, Slesvig-Holsteen, the City of Lybæk, the State of Mecklenburg, the Principality of Rygen, and the Duchy of Preymeren. Furthermore, the following three countries are candidate members (meaning that enjoy some priviledged status and have the right to attend meetings): Ukraine, Belarus and the Republic of Petrograd and Novgorod. The League was founded in 1653, after the dramatic rise in the Øresund Tax by the Danish king Christian IV had caused a split in the Hanseatic League.

The Republic is the largest and most powerful member of the League. The League has traditionally been one of commerce and trade, though mutual defense has also been an important aspect of its activities. The famous Lufthansa is the airship fleet of the League, and operates both passenger and goods transport services. Low German is the traditional official language of League business; however, Wenedyk is the most commonly used language by the ministers.

Low German is the traditional language of the Hansa / Baltic League because Hamburg and a couple other towns of Northern Germany were the birthplace of the League. From those cities, their influence spread east into Veneda (later the Republic of the Two Crowns), Sweden and the Baltic countries.

Anymore, it may be that German is a "formulaic" language (except that ministers from German cities, obviously, speak Low German as a matter of course). Official in that documents are drawn up in it and some official records are kept in it. But day to day administration and actual business is done in other languages like Wenedyk and Lithuanian. Sort of like the way Latin is the official language of the RC church; but business in the Vatican is done in the dialect of Rome. 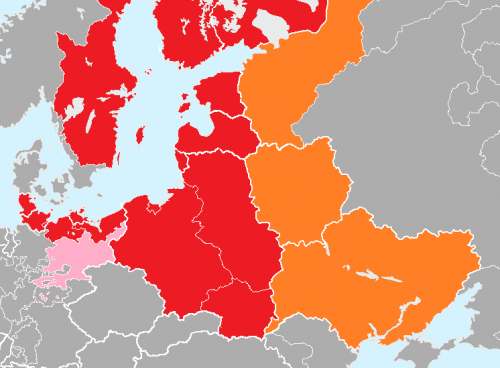