Venedair S.A. is the main airline provider of the Republic of the Two Crowns, and one of the major companies of the country. It serves 57 major cities all over the world, as well as domestic service. It is predominantly confined to the cities of the Baltic League, but does also serve places like Quiòto and Kieñseñ in Asia, as well as New Amsterdam, Paris-sur-Mizouri, Ville-Marie and Los Angeles in North America.

Its primary hub is Jagiełło Aerodrome in Warsina, with Paweł Żaklin International Aerodrome in Kordyn as an important secondary hub. Venedair's airfleet consists of 95 airships and five aircraft. These have never all been on the ground at the same time and same location, of course, as even Venedair's large holdings near the Jagiełło Aerodrome are not sufficient to service more than 5% of their fleet at a given time.

Venedair is expected to serve as the anchor airline when the Batavian government opens several aerodromes in the Frisian Islands thanks to the recently completed reclamation project.

Venedair S.A. was founded on 1 January 1929 when all private airlines in the country were merged into one national airline. Throughout the Interbellum period Venedair built their service area to serve areas outside of their local region, beginning weekly flights to New Amsterdam in 1932.

Following the restoration of the Republic of the Two Crowns after the Second Great War, Venedair continued to be the major airline for the RTC despite the unification. Lithuanian Lietuvair was folded into Venedair, and despite the seeming bias to Veneda, the name has remained unchange. Recent outcry has resulted in the formation of regional Air Lithuania, serving destinations within Lithuania with correspondences in Veneda and Galicia. 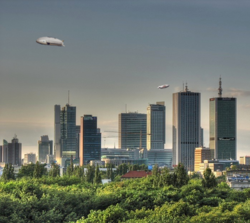 A skyline view of Warsina, with the Venedair tower on the right.

Following the end of SNOR in neighboring countries, Venedair had gained a successful share of the market as air service was unchanged during the transition. Since the Second Great War, Venedair has transformed itself into a "working man's luxury liner," offering high quality services to its passengers that are touted as being heretofore the services of the rich.

Venedair has greatly increased its markets to the east and south. An air war between Lufthansa and Venedair was feared in the 1990's, but was averted with the "Star-Alliance" (German: Sternallianz; Wenedyk: Olęca Ściołar) where Venedair and Lufthansa worked amicably with one another. This move has proven highly fruitful, but has resulted in loose "spheres-of-influence" where the two airlines allow one or the other to control a local market.