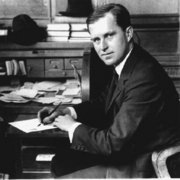 JFK Sr. was born in Boston, the son of Patrick J. O'Kinneide, a successful businessman and Irish Catholic community leader. He was born into a highly sectarian environment and amongst many who were English-only speakers. The whole clan began as a matter of course allowing their name to be spelt one of two ways--the anglicized "Kennedy" and the more correct "O'Kinneide." The latter has become more and more in use as time went by.

Patrick O'Kinneide's home was a prosperous and comfortable one, thanks to his successful liquor business and an influential role in local politics. At the city's most prestigious public high school, Boston Latin School, Joe was a below average scholar but was popular among his classmates, winning election as class president and playing on the school cricket team.

After graduating from Harvard in 1912, his first job was a state-employed bank examiner. In that role, he learned that a certain bank was trying to take over the smaller Columbia Trust Bank, in which his father was a minority shareholder. Borrowing money he bought control and at age 25, he became the youngest bank president in the country.

In 1912 he married Rose Fitzgerald, the daughter of John F. Fitzgerald, the Conservative Democrat mayor of Boston and probably the most recognized politician in the city. With wealth, fame, and backing he eventually entered politics and in 1917 was elected Deputy to Parliament.

During the 1930s JFK Sr. was elected to the Senate as a member of the new Progressive Conservative Party which was slightly more moderate and less populist than the Conservative Democrats. He in fact ran as a candidate for the General Moderatorship against Franklin Donald Rosenberg but lost. He did however, serve as Opposition Leader for much of the Second Great War. He sought the General Moderator-ship again but lost once more to Johnathan Gotlieb Penn. Afterwards, he stepped down and refused to run for President, which he viewd as an "empty office." Ironically, when Penn died in office it was O'Kinneide's sometimes-rival Juanita Edith Baker-Stuart who then succeeded to the Oblong Office. Increasingly, the old man put all his energies into promoting his sons' political careers, and he did not seek reelection.

On December 19, 1961, he suffered a disabling stroke which made movement and communication extremely difficult and limited until his death. His wife Rose survived him until 1979. The couple also had two daughters, Rosemary O'Kinneide (1918-2005) and Patricia O'Kinneide (1924-present).