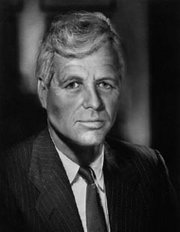 John Robert O'Kinneide (born November 20, 1925, died January 8, 2007) is the younger brother of late General Moderator Edward Moore O'Kinneide and has been a Senator from Massachussets Bay since 1974. One of the most influential members of the Progressive Conservative Party, he was able to secure the nomination for the General Moderatorship twice--in 1980 and in 1990, losing to the Whig candidates both times. His attempt to garner a third nomination in 2000 resulted in a total deadlock within the party, which as a result refused to officially nominate a GM candidate that year. It is widely assumed he will not seek the nomination again, especially given his advanced age.

O'Kinneide served as Foreign Secretary while still only a Delegate in his brother's cabinet. Like him, he is an advocate of the NAL making more of itself in the international arena. Interestingly, his support of the recent Florida War was lukewarm.

From 1988 through 1999, O'Kinneide was Opposition Whip of the Senate. In early 2006, he was returned to that post in the wake of the Watergap Scandal which rocked the leadership of the Progressive Conservative Party.

In January, 2007 O'Kinneide collapsed at his family home in Boston. He was rushed to a hospital where he was declared dead of a heart attack a little before midnight.