A canny politico, Juanita Edith Baker-Stuart managed to parlay a position as GM on the death of her predecessor. She remained the Grande Dame of the Progressive Conservative Party until a stroke incapacitated her in 1979.

One of many controversial (especially in hindsight) programs during her term of office was the creation of the National Intelligence Office (NIO) to coordinate intelligence sources and authorize operations.

In September 1958, the intelligence gathering dirigible Albatross 2 (A-2) was shot down over Russia which caused considerable embarrassment. Her administration ultimately had to apologize in order to guarantee the safe return of A-2's pilot. Among other things, this made nearly all of the NAL's neighbors suspect such flights were taking place over their own territory (such suspicions were entirely justified--and in several cases were not suspicions).

Baker-Stuart tried to hand-pick her successor, having groomed Senator Edward Moore O'Kinneide throughout her tenure in office. Although he did not immediately succeed her, he did become GM upon the death of Jowcko map Jowcko. Baker-Stuart became increasingly critical of his efforts to pursue his own policies and agenda. 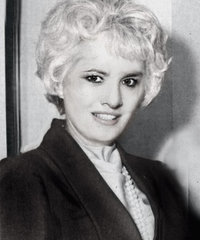