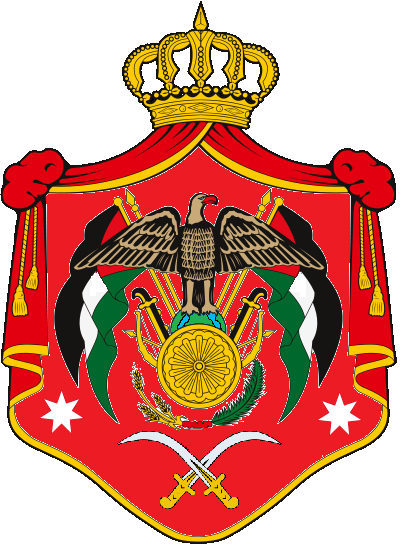 The first coat-of-arms of Iraaq was adopted in 1921 by royal decree. It greatly resembled the coat-of-arms of the Hijaaz, the other country ruled by the main branch of the Hashemite royal family.

Within the cloak there were two Iraaqi flags, which were nearly indistinguishable from the flags of the Hijaaz and the Arab Rebellion (1916-1918), touched by the wings of a hawk (symbolizing Arab unity). The hawk was perched on a green globe symbolizing Iraaq which was crossed by two blue stripes, symbolizing the rivers Tigre and Euphrates.

A bronze shield in front of the globe represented the defense of truth and right in the world. The spears, swords, bows and arrows were traditional Arab weapons. Below the shield to the left there were three branches of wheat, and to the right a palm branch. 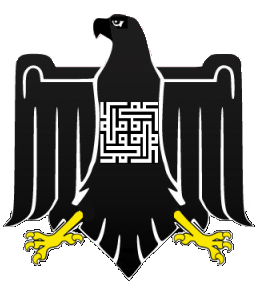 In 1935, the new King Ghazi I adopted as the Iraaqi state ideology the Ba’ath (Renaissance) or, as it is commonly known abroad, Arab Snorism. A new coat-of-arms was also adopted inspired by the Snorist Russian coat-of-arms.

The black roc bore an artistic inscription with the word "Allah".

In 1939, Ghazi I died, Arab Snorism was abandoned, and the previous coat-of-arms was re-adopted. 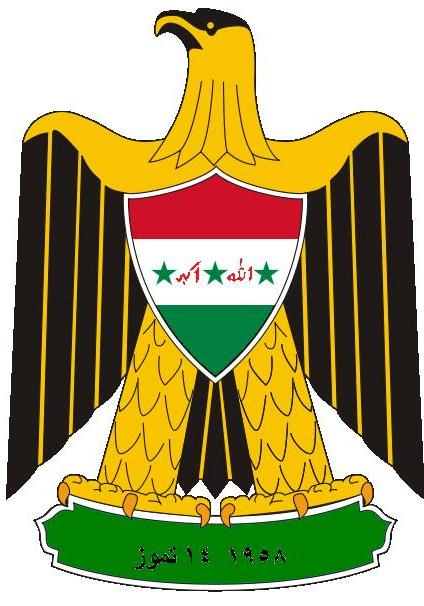 The Hashemite rule ended in Iraaq on 14 July 1958 after a bloody coup led by General Abdul Karim Qassim. Iraaq then became a kingdom with a vacant throne, pan-Arabist with Communist tendencies.

The new political power replaced the Iraaqi coat-of-arms. The eagle of Saladin (now in gold) was re-adopted giving now to the national coat-of-arms a strong resemblance to the arms of the United Arab Republic. The golden eagle, symbolizing Arab unity and strength, bore a shield with the new flag of Iraaq and held a scroll with the inscription “14 July 1958”, the day of Qassim’s coup, officially known as the National Revolution.

Meanwhile the Hashemites established the Iraaqi Government in Exile which was recognized internationally while Qassim’s regime was not. The exiled government used the 1921 coat of arms until, in 1968, it was disestablished after King Hussayn I of the Hijaaz gave up its pretentions to the Iraaqi throne.

In 1968, Qassim declared Iraaq a republic. Once again the Iraaqi coat-of-arms was changed, now combining Pan-Arabism with Communism. It was basically the previous coat-of-arms within branches of wheat crowned with a red star (symbolizing socialism) and a red crescent (symbolizing the Muslim faith). The eagle held a scroll with a new inscription, “Republic of Iraaq”. 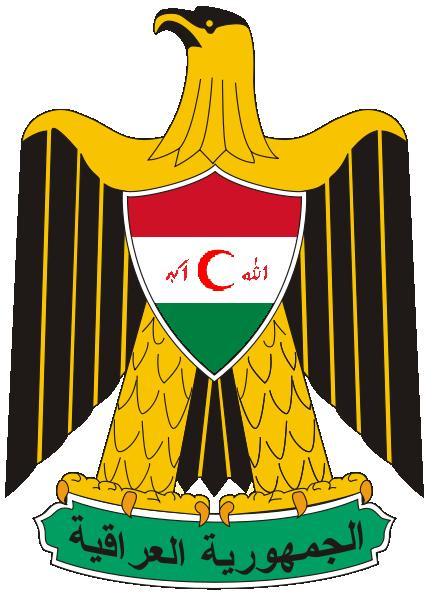 In 1979, Qassim was deposed by his vice-president, Saddaam Hussayn. The country shifted from socialism to a radical Islam regime under Sunni principles despite the fact that, by then, most of the population was Shiite. The Iraaqi coat-of-arms lost the wheat branches and the symbols ontop while the shield was changed to accomodate the new national flag design. All the rest was kept unchanged.

In 1981, to celebrate the Pan-Arab victory of the union of Iraaq and the conquered Persian province of Khuzestan iraaqi, the coat-of-arms underwent its most significant change since 1958.

The eagle of Saladin was replaced by the hawk of Quraish, the symbol of the Qureishi, the Prophet Muhammad’s tribe. This was intended to keep the pan-Arabist ideal and give it a stronger religious meaning. The shield likewise was changed but kept the previous symbolism. 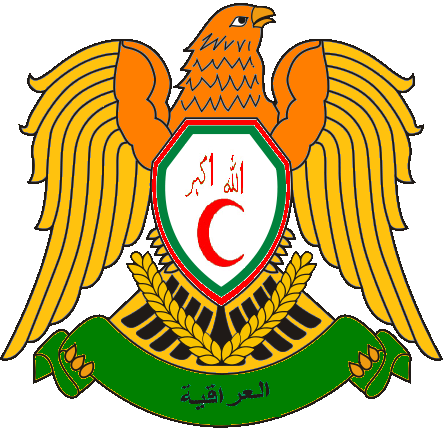 This was the last change of the Iraaqi coat of arms. Despite Sheik Hussayn’s fall in 2003, the coat-of-arms was not changed, as were the other national symbols. Since then there has been a discussion about changing the national symbols to remove any reference to decades of dictatorship now that democracy has been achieved. It is said that the survival the symbols of Hussayn’s era is due to the fact that Iraaq is nowadays a country with a Sunni majority resulting from the independence of Al-Basra and the massive emigration of Shiite refugees since then.