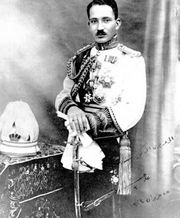 Ghazi bin Faisal (in Arabic: غازي ابن فيصل‎) was born on the 21st March 1912 in Mecca, Hijaaz. He was the oldest son (after two daughters) of the future king of Hijaaz and Iraaq Faisal bin Hussayn. He was left under the care of his uncle Ibrahim bin Hussayn while his father was busy with constant military campaigns (notably the Arab Rebellion of 1916-18) and the administration of Iraaq since 1921. As result Ghazi was never developed a close relationship with his own father.

In 1924 king Faisal I appointed Ghazi as crown prince. From then he lived with his father in Baghdaad, Iraaq. In 1928 he was sent to the Naval Academy, in Annapolis, NAL, to have a proper military education. Ghazi spent the next three years there, learning ideas and meeting people who influenced him for the rest of his life.

At the academy he knew several people sympathetic to SNORism . When he returned to Iraaq, in 1931, the king found his son quite changed and with ideas quite different to his, a fact that would cause a certain conflict between them.

While Faisal I defended his view of monarchic pan-arabism to unite all arab countries around a restored Caliphate (his proposed Hashemite Caliphate) Ghazi considered that such would create an unstable country impossible to rule as the several Arab countries are so different from each other and local rulers would never accept losing their political power. Ghazi considered himself an arab nationalist but not a pan-arabist.

On the 8th September 1933 Faisal I died, poisoned. The crown prince became the new king of Iraaq and Hijaaz as Ghazi I so as became the new Grand Sharif of Mecca. Rumours said that Ghazi himself might have poisoned his own father but others considered that the king was killed by foreigners. As there were several foreign advisors (mostly from the Federated Kingdoms) around the previous king Ghazi found then the excuse to expel all of them which caused some tensions with their countries-of-origin.

Ghazi started a programme of public works in both of his kingdoms using the profits from iraaqi oil production. In Hijaaz, a new road between Mecca and Medina was constructed while Jiddah port facilities were increased. In Iraaq the most important works were the increase of Al-Basra port facilities (which made of it the largest in Arabian Gulf at the time) and a new road connecting Baghdaad to Al-Basra.

The administration of both Hashemite kingdoms was kept separate so as laws and international representations. On this Ghazi pursued his father’s policies. Also kept were the same policies with iraaqi tribal leaders who stayed loyal to the new king.

In 1934 king Ghazi married and his son Faisal bin Ghazi was born a year later.

In 1935 Ghazi made a state visit to SNORist Russia. He met personally Aleksandr Kolchak and was well impressed with the achievements made in Russia by SNORist powers. Ghazi decided to adapt SNORism to arab reality and returned with Russian advisors who will help him to build SNORism in Iraaq. In Hijaaz the power would stay traditionalistic, tribal and quite theocratic as before due to the Hashemite popularity established for a long time. In Iraaq things were different as for local common people the Hashemite were foreign occupiers.

Ghazi surrounded himself by loyal military and Sunni clerics and soon a single political party was founded in Iraaq, the Ba’ath (Renaissance), which would also be the local name of the new iraaqi ideology. Elsewhere it would be known as Arab SNORism. As the Russian SNOR it was ardently nationalist and connected to religion, in this case Islam, notably to Sunni sect as the Hashemite followed that tendency. Although most of iraaqi population was Shiite the power stayed under the Sunni minority hands and Sunni sect was considered as "the true historical faith in Iraaq" but the Shiite were respected even if they usually were apart from political power decisions. Islam and the Arab language were considered as vital constituents of Iraaqi national spirit and they were greatly promoted by propaganda and the growing Iraaqi educational system. Propaganda also promoted a cult of personality centered around the king. Ghazi I took his father’s dream of a Hashemite Caliphate and made it evolve and modernized it providing the ideal with modern political structures replacing the initial plan for a traditionalist absolute monarchy.

Even the traditional Iraaqi coat of arms was changed to a more SNORist design.

Ba’ath saw colonial influences and Communism as their enemies and their followers were violently persecuted and some sources consider that these persecutions caused 50,000 deaths at least.

During these times the administration of Hijaaz tended to be a bit neglected.

Propaganda was widely used and Babylon was partially rebuilt (not exactly with historical rigor) to host the Ba’ath National Congress of 1936. A famous Russian propaganda film maker (Sergei Tarkovsky) went to Iraaq to make a movie about the Congress and this film is still today considered a master piece of propagandistic cinema.

Due to the approaching of Grossartige Allianz countries (Holy Roman Empire and Russia), the Federated Kingdoms started to be worried about having a possible enemy in the Middle East which could attack their interests in the region, notably the oil supplies and protectorates. Ghazi was also keeping quite an anti-colonialist rhetoric and showed an interest in taking future countries as Kuwayt (according to him part of historical Iraaq), Saudi Arabia (a threat to Mecca and Hijaaz in general) and the Thousand Emirates by force.

On 4 April 1939 King Ghazi I died in an airship crash while he was landing at Faisal I Royal Aerodrome in Baghdaad. Some say that before the crash there was an explosion but this was never confirmed. Although Ghazi had plenty of possible enemies (the Saudi royal family, Ibrahim bin Hussayn, European governments from the Allied Powers or even other princes from the Hashemite royal family) this remains until an unsolved mystery until the present. Ghazi was the first Arab head of state dying in an air crash. His death surrounded him in a local myth, at first exploited in SNORist Russia as the killing of a martyr. However, as Russian influence over the Middle East was not great, this exploitation was soon forgotten. Among Iraaqis he became a symbol of Arab nationalism which fought against foreign intervention over their countries and his brutality was forgotten during the following regency which was even more brutal. For many he is still remembered as a great leader who died young because of his ideals and, in post-Saddaam Hussayn Iraaq, he became an inspiration for local nationalist political parties who saw an King Ghazi I a reformer and someone who did much for Iraaqi progress (although he was not Iraaqi but Hijaazi). Was his death accidental or was he murdered? Such is still much debated in Iraaq but outside Ghazi stays almost unknown.

His four-year-old son, Faisal, succeeded him as King Faisal II under the regency of Ghazi’s uncle, Ibrahim bin Hussayn who, during the following years dismantled the Ba’ath and turned Iraaq back to the Federated Kingdoms' sympathy.