Vilnija was established as a province after the reunification of Veneda and Lithuania after the Second Great War.

As a center of Lithuania, Vilnija received a great deal of investments and managed to rebuild itself relatively quickly. The area was industrial before the war and by 1960s the industry level was already larger than the interwar one. Vilnija therefore drew many immigrants from other parts of Lithuania and the RTC, especially Žemaitija, Palenkė and Polesė.

In 70s and 80s the railroad network was expanded greatly, making the network the densest in the RTC. The railroads that were built before were electrified and reconstructed into double-track (where they were single-track) or in some cases including even more tracks. In the major cities such as Vilnius the newly built railroads were underground and they additionaly were built as subways. While at the start the ridership of expanded passenger railways failed to meet expectancies, it increased with time and reformed the way of life in Vilnija, with many people choosing to live outside major cities and commute everyday. Even more far away places where previously it would have been inconvinient to live if one have worked in city practically turned into suburbs of such cities (primarilly Vilnius). The practice that was common among students from other places of Vilnija to rent a flat in Vilnius in case they study in the Vilnius University has almost died out together with many other similar practices.

Economy of Vilnija is industry-based. It was for long leading in Lithuania, but recently had been surpassed by that of Samogitia; currently, Vilnija is in recession.

Traditionally, Vilnija is a conservative province. The percentage of people coming from the families of nobles in Vilnija is the highest of all the provinces of Lithuania.

Most of the province has Lithuanian majority, but the south of Vilnija is Belarusian-dominated. Vened communities exist in the main cities, especially Vilnius, Trakai and the surroundings. Jews as well live primarilly in the cities. 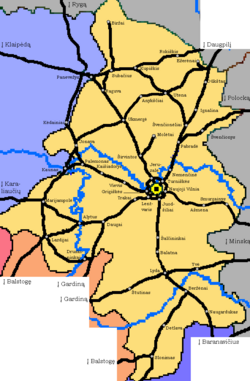 The main railways of Vilnija with stations where the fast trains stop at marked.

Railroad network of Vilnija is one of the best in the RTC due to priorities of the provincial government for its development (it was seen as a mean of improving industry outside Vilnius and as well as one of measures to reduce traffic). Vilnius international airport is the largest in Lithuania. Several main cities, including Vilnius, Lyda and Alytus has their subway systems; these systems are connected directly to the railroads. The speed of intercity passenger trains is at 180-220 km/h. This makes no part of the province to be at more than 2 hours distance from Vilnius and therefore commuting is easy. The train tickets are cheap, but the trains are generally cramped in the mornings and evenings near the main cities. There are two types of trains - commuter (vietiniai) and fast (greitieji). The commuter trains are in fact not always really commuter - they quite frequently travel distances similar to the fast trains, but they stop at every station, which makes them relatively slow and primarilly used to commute from one town to another or from suburbs to a city. The fast trains stop only at the larger towns and cities. The general way of travelling in Vilnija if you have to travel from one small town to another small town far away is to board a commuter train and go to the next larger town, then board a fast train and go to the closest larger town near the destination, and then board a commuter train again to reach the destination. As the train schedules are frequent no long waiting times are involved usually. On most major lines trains travel at nights as well as days, although on reduced schedule.

The railways of Vilnija are known for the large centrifugal force experienced by passengers (as the trains achieves high speeds on tracks that are built for much slower speeds), but there are attempts to ease that by using titlting trains (these are however still relatively rare). The jokes about the large centrifugal force inside the passeneger trains of Vilnija are well known in the other provinces of RTC. An example is provided here:

A husband comes back to his home in Kaunas at 2 AM. He is barely able to stand on his foot and bruises on his left side are noticeable. His wife notices this and says angrily: "I thought you were on a business trip! But you were drinking alcohol again! And you have drank so much that you have fell down!". The husband answers her: "I waaasss on busssiiinneess trrriiip. It's juuusst thaaat I caaamee baaacck frooomm Druuuskiiiniiinnnkaai byyy traaain". In this case another reason for the joke is the fact that Druskininkai-Kaunas railway line has many turns to the right.

The road network, however, is generally considered to be relatively bad. The divided highways are only available around Vilnius. It is generally encouraged to travel by rail, however, due to pressure from the government of RTC and other provinces, some improvements on the road network are also planned.

The current flag of Vilnija was adopted after a contest in 1958.

The hoist incorporates coat of arms of former Vilnius Voivodship (mounted soldier) and the fly incorporates coat of arms of former Trakai Voivodship (foot soldier). Until the XX century these two Voivodships formed large parts of territory where modern Vilnija is now. The existance of both Cross of Jogaila and Towers of Gediminas represents the unity between Veneds, nobility, Christians (traditionally more associated with the Cross of Jogaila) and the Lithuanians, pagans, ones from poor backgrounds (traditionally more associated with the Towers of Gediminas). This also signifies the unity of different Lithuanian historical periods. In between both coats of arms there is a white/yellow/white vertical stripe. Inscriptions on the white stripes "Laisvė, Stiprybė, Džiaugsmas, Taika" means "Freedom, Strenght, Joy, Peace" respectively and reminds of the provincial motto. On the yellow stripe there are icons of a wooden plough, a book and a lyre. These symbols are derived from Maironis's poem "Užtrauksme naują giesmę" ("We will sing a new hymn") in which there are words "Paimsme arklą, knygą, lyrą ir eisim Lietuvos keliu" ("We will take a wooden plough, a book, a lyre and go the Lithuanian way"). These symbols represent the three things every person should do (working, studying and creating). Also these symbols represent three classes of the people (peasants, scholars and artists) which unites in order to achieve the goals declared in the provincial motto. The foot soldier and mounted soldier also represent the unity of people from diferent classes and backgrounds in defending these goals.

Proportions of the flag are quite unusual 1:2.5.