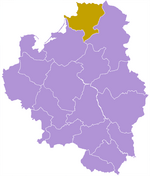 A Map of the RTC showing the Province of Žemaitija.

Žemaitija (Samogitia) is a province of Lithuania.

Samogitia is the only part of Lithuania that has access to the sea (Baltic Sea). The westernmost point of Lithuania is in Samogitia (Klaipėda). Samogitia borders Skuodia to the northwest, Latvia to the north, province of Vilnija to the east and southeast, Veneda (its Prusi province) to the south and southwest and Baltic Sea to the west. The lowlands dominates the region, its eastern and southern parts, while on the Skuodian border the Samogitian plateau exists. Highest hill - Medvėgalis - is 234 meters above sea level. Major cities are the capital Kaunas, major Lithuania's seaport Klaipėda, Šiauliai, Panevėžys, Varniai, Kėdainiai, Telšiai, Tauragė and others. 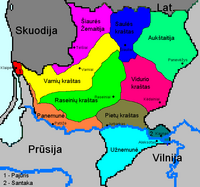 Administrativelly, Samogitia is subdivided into 11 kraštai (singular - kraštas), roughly comprising to region. This is a new subdivision that has changed a previous one; it was established in year 2000 as part of the reforms in the province. The kraštai roughly corresponds to the limits of the areas of dialects of Lithuanian language, some geographical features and such. 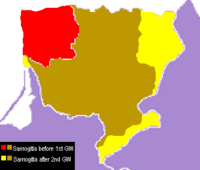 A map comparing the territories of pre-1GW and post-2GW Samogitia.

Prior to the First Great War, Žemaičių Seniūnija (Samogitian Elderate) was one of the divisions of the Grand Duchy of Lithuania. After Lithuania became independent, it was abolished and its lands incorporated into Varnių apskritis and Šiaulių apskritis, with some lands also going to Kauno apskritis.

The Russian puppet state, so-called Lithuanian State, that was established in 1947, had one of its provinces named Samogitia.

Žemaitija (Samogitia) on the current borders was established after the reunification of Lithuania and Veneda and the administrational reform which underwent then. It is meant as a continuation of Samogitian Elderate of old pre-war Lithuanian-Venedic union, however its area is somewhat different. As a compensation for lost lands of southern Skuodia, areas of western Aukštaitija, middle Transnemun, city of Kaunas and city of Klaipėda were attached to Samogitia. Kaunas became its new capital in place of the old capital Varniai.

Traditionally Samogitia was poorer and more agricultural than the industrial Vilnija. In the end of 20th century however this changed as the technology was promoted especially by the government of Artūras Zuokas. The face of province changed since 1998 and since 2001 it experienced a large growth in GDP. The University of Modern Sciences was estabilished in Kaunas in year 2000, which attracted some of world's famous industry pioneers. Many high tech companies established their branches in the newly created free scientific zones; jobs there attracted many people from elsewhere and Samogitian growth rate was positive in the last years, unlike in neighboring Vilnija. In year 2006, the GDP per capita in Samogitia became the largest in Lithuania, surpassing the GDP per capita in Vilnija. These events are usually called Samogitian revival.

Samogitia has the highest GNP per capita of Lithuanian provinces. It advanced much during the leadership of Artūras Zuokas, high technology in particular became important in Samogitia.

Main contrbutors to Samogitian economy are the electronic and computer development corporations, inventors and manufactorers of robotic technologies for usage in factories, etc. Most of these companies were estabilished in last 10 years, some by foreign investors; the positive attitude by Samogitian government to technology development and oproviding support for it, as well the availability of workforce (from the University of Modern Sciences), spurs this development. Intially criticised (people thought these companies, although supported by government, will go bankrupt soon and it will be a waste of money), now the policies are more supported, and other provinces of Lithuania, especially underdeveloped southern ones, starts to thinking about implementing the same model; but it is unclear now as it might be too late for them.

Agriculture, which was the main economy for most of 20th century, still is somewhat important, although due to the switch of governmental subsidies from agriculture to high tech, the Samogitian agriculture sector became less competitable in the RTC. This led to many major protest by the farmers.

Klaipėda, Lithuania's only seaport, is as well important to the economy to some extent, although the competition with the Venedic ports is hard.

Usually the rightist factions are popular in Samogitia. Recent years as well seen the rise of nationalist parties; in fact, nationalist faction "Lietuvių Tautos Sargai" is now the second largest one and is larger than leftist Karalystės Krikščioniška Garbė. The leading faction continues to be the Modernioji Žemaitija, rightist one, which runs the minority government. It was expected that the nationalists might even win in previous elections, but it didn't happen and the New Democratic Union won most seats.

Seimas of Samogitia has 159 seats.

Seats by party in Seimas

Seats by faction in Seimas

DKRKP does not belong to any faction.

In Samogitia, most of people are Lithuanians, some of them are speakers of Samogitian dialect, which is quite different from standard Lithuanian. For a long time Samogitia was a place of emigration - mostly to Vilnija, Masowia and other richer parts of the RTC - the trend has reversed now and the population of Samogitia started to increase. New communities, such as Belarusian and Ukrainian, appeared, while the community of Veneds had increased. Some Latvians and Skuodians from Latvia and Skuodia as well found jobs in Samogitia. Thus cities like Kaunas, Šiauliai and Panevėžys aquired a distinct more multicultural feel, which was previously noticable only in Klaipėda, a port town.

Some of the speakers of Samogitian dialect feel that their rights are not guarded, as most of the Samogitia's elite comes from lands inhabitted by non-Samogitian speakers, such as Kaunas. Many of such non-Samogitian speakers consider themselves to be Samogitians anyways however; but some of them sees Samogitian dialect as an anachronism. However, the dialect (sometimes reffered to as Samogitian language) is experiencing a revival and is viewed more positivelly by non-speakers also these days than for example 30 years ago. It was officially recognised as "recognised language" in Samogitia in 1997 - this status means that advertisements, publications, some documents could be written in Samogitian; Samogitian-speakers however seeks its recognition as "provincial language", which would mean that people would get right to contact government in Samogitian and it would share equal rights with Lithuanian in the province.

Those Samogitians who want the region to be based on dialect and culture rather than self-allegiance, sometimes suggest that Samogitia should be made smaller by ceding away its eastern lands, including Kaunas. They believe capital should be moved to Varniai, historical capital.

Most Lithuanians and ethnic Samogitians are Baltic Pagan, although those originating from the territories that were formerly part of the Holy Roman Empire (Panemunė and Pajūris regions, including city of Klaipėda) are usually Lutheran; so are the majority of Saxons and Germans. Veneds and Skuodians are mostly Roman Catholics, while Ukrainians and Belarusians - Greek Catholics. Rural population is more religious than urban one.

Regions of Samogitia by approximate number of inhabittants:

Samogitia generally relies on road transport more than rail one, unlike Vilnija. The railroads in place are those built in the interwar and earlier; the maximum possible speed on them is low and thus they are mostly used for moving freight. The road density is inadequate, although it is being improved (new toll roads are being constructed, largely funded by private companies). There are plans for a Maglev train for route Kaunas-Klaipėda although this is ionly for the future. Žemaitijos Oro Bendrovė, Samogitian airline, serves from Kaunas and Klaipėda, as well operates some flights from Šiauliai. Ferries connects the port of Klaipėda to Scandinavian Realm and the Holy Roman Empire, as well as Danzig.