The province of Karpatia is located in the very South of the RTC. It borders with the provinces of Leonina and Olwarzyn in the North, with Slevania in the West, and with Hungary in the South. It is separated from the latter by the river Tisa.

Karpatia is governed by a governor and a provincial diet, elected each four years in provincial and municipal elections that encompass all Veneda. It consists of 43 members. The composition of the Karpatian Diet, elected in 2003, is as follows:

For an explanation of the parties, see: Political parties in the RTC

Since the Middle Ages, Karpatia has been part of Hungary. After Hungary was defeated in the Second Great War and occupied by Russian troops, Russia divided it into five parts: Oltenia, Muntenia, Slevania, Karpatia and Hungary proper. The new state of Karpatia, carved out of Hungary, was an attempt of the White Council to establish yet another SNORist state. It lasted eleven months, from June 1948 till May 1949. During its short existence, only three states recognised it: snorist Russia, Ukraine and Nassland. After Russia had installed the government, Karpatia too had a White Council (though it, of course, payed homage to the White Council in Russia). Its sole leader was Oleksandr Sawicky.

Had Russia succeeded in giving Galicia to Ukraine, Karpatia sooner or later would probably have been annexed by Ukraine as well.

The state of Karpatia was dissolved when its citizens voted to merge with the RTC, a neutral state at the time. It became part of the autonomous region of Galicia in 1956. 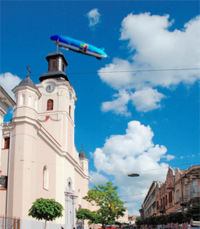 Karpatia is the home of most Rusyns living in the RTC (smaller concentrations are also to be found in other provinces, notably Pieskła Weneda). The Rusyns are an East Slavic nation, closely related to the Ruthenes and the Ukrainians. During their history Rusyns were influenced by Slevan, Hungarian and Ukrainian cultures. The independence movement among them is not very strong. The majority of Carpathians feel rather attached to the RTC, a multinational state where - in spite of a few unpleasantires every now and then - nationalities can freely enjoy their own culture, language, and religion. They believe they are better off in the RTC than in Slevania or in a strongly ukrainised state.

Karpatia also host a high number of Slevans. Many of them are beginning to look at the possibility of either a free Karpacja, or becoming a part of Slevania, though no political party has yet formed that uses that in its platform.

Another minority of Karpatia are Hungarians, that mostly favor reunification with the Kingdom of Hungary. They are represented in RTC by the Hungarian National Party (Magyar Nemzeti Párt).