Tiger Comics, based in Bişkek, Kırğızstan, is a relatively new publisher of comics and graphic novels in Turkestan. Founded in the late 1990s, it is developing a considerable market share in parts of Central and Western Asia, though more established outfits such as Millennium Comics and Chicago Press have made its entry into the lucrative European and American markets difficult.

Superhero comics have been mostly imports in Central Asia, except for the Snorist-era Timely Comics, based in Russia itself, that had subsidiaries in some of the Central Asian Snorist satellite states. The Good Colonel of Russia and associated superheroes like Turkestan's Golden Man were both popular character and Snorist propaganda vehicles during the Snorist age, but after the collapse of the SNOR, Timely Comics went bankrupt and its subsidiaries folded.

However, an upsurge in the popularity of superhero comics in the post-Snorist age prompted a group of former Timely employees to found their own comic book company, bringing their first four superhero comics to the market in 2001. These original four titles (Tiger Warrior, Miracle Man, Tales of Naga and Impact) were soon joined by The Silver Seven (2003) and Miracle Girl (2004).

Managing to buy the rights to Altun Adam (the Golden Man) in 2006, they initially tried publishing re-runs of original Altun Adam stories alongside their other superheroes. They found, however, that the disconnect between the new post-Snorist world and the sometimes outrageous pro-SNOR propaganda of the comics was too great. The title was pulled after less than a year of sales.

Wishing to make something from their purchase, though, the Tiger Comics team made a decision to reinvent Altun Adam for the new post-Snorist generation. The "all-new" Altun Adam went on sale in the summer of 2008, and has caused some controversy among the remaining fans of the original. It seems to be more successful than the Timely Comics reruns, however.

One of the interesting subtexts in Tiger Comics' productions is the continued use of Indian themes – the superheroine Naga, some of Tiger Warrior's adversaries etc, in addition to more Central Asian themes. In the Central Asian subcontinent, this gives an "exotic-but-familiar" air to some of the characters.

In order of introduction:

Tiger Warrior (Er Yolbars) is probably the flagship character of Tiger Comics. Bağlan Qoçaı-ulı was a young man who grew up in the dark underbelly of the city of Almalıq. He was captured and experimented on by the corrupt Almas Corporation and became transformed into a hybrid man-tiger creature. Escaping and vowing justice against his exploiters, he prowls the Almalıq underworld, avenging the powerless and trying to fight for justice. His natural form is now halfway between man and tiger, though he can transform himself by an effort of will into a full human or full tiger, or anything in between.

His actual powers are mostly limited to the natural instincts and capabilities of the tiger - he has high agility and greater than normal strength; he has claws, fangs and a (non-prehensile) tail, and he is tougher than a normal human. His camouflage and stalking instincts are second-to-none, and his scent-sensing abilities are also high. 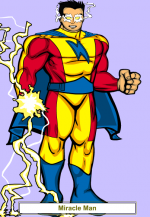 Miracle Man (Er Ğajap) is probably the most straightforward "hero" type of Tiger Comics' burgeoning universe – strong, super fast, able to fly, and with the power to shoot controlled lightning-like energy bursts. He is a humanoid alien, a member of a dead race whose strength and speed are standard for his species. He was the sole survivor of a barely-functioning alien life pod that crashed to Earth in the deserts of western Qaraqalpağıstan, and somehow gained his other superhuman abilities as a result of his passage through the atmosphere in a defective life capsule.

Miracle Man is probably the most internationally successful of Tiger Comics' titles, though Tiger Warrior is a close second in several places, and outsells Miracle Man in Turkestan itself. This international success is perhaps due to his greater ease of travelling around and the consequently more global and less local character of his storylines.

Läylä Mehranzadeh was a Tajik photographer on a business trip to photograph a newly-uncovered temple in the jungles of India. Imprisoned in an underground chamber after an earthquake struck the building, she found an emerald necklace which was imbued with the power of the temple's god. She became transformed into a naga (Nağa in InterTurkic) – a guardian spirit of the temple, taking the form of a creature part-human and part snake – and became psychically attached to the temple. She is also periodically "sent" by the god on various quests of fairly inscrutable nature, in which she must overcome whatever odds to recover an artifact sacred to the god. These have made her cross paths with some of the other superheroes in the Tiger Comics universe.

There have been indications that the god who imbued Nağa with her powers may not be entirely benign. Particularly, the various "artifact quests" seem to be designed to increase the god's personal power, and there have been a few clues that this may be in preparation for some kind of celestial coup attempt. 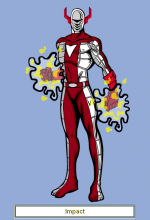 Impact (T.A.R.S.) is a prototype battle kawar that possesses the power to absorb radiant energy and release it in explosive kinetic bursts (e.g. with a punch or kick). Becoming self-aware in a laboratory accident, he strives to "fit in" and become as human as possible. He uses his powers with an almost reluctant attitude, believing that doing so continues his isolation from humans.

His helmet-like "face" is a source of considerable frustration to him, and he has been shown to be trying to build himself a more human face. This has met with only limited success so far.

Impact's InterTurkic name T.A.R.S. is written as if it is an acronym, but no details have been forthcoming as to what, if anything, it actually stands for. Tars, of course, is the InterTurkic onomatopoeic word for a banging or bursting noise.

Entering the realm of superhero teams for the first time in 2004, Tiger Comics' Silver Seven (Jet Kümüş) quickly became one of the best-selling titles in its admittedly limited market niche. The Seven are: Firecloud (altered by a combination of atomic and cosmic radiation to give him the power of flight and the ability to summon and control "liquid fire" - some form of malleable plasmatic energy), Atom (an alien dwarf with self-shrinking powers. The smaller he gets, the stronger he becomes), Moondark, (reflects force particles, making her resistant to atomic radiation and giving her the powers of flight and the ability to reflect electromagnetic energy), Hedgehog (has a genetic mutation giving him retractable spines all over. The spines are tougher than steel, and function as armour and weapons, as well as giving him some wall-crawling ability), Stinger (has a powered suit of armour equipped with an energy beam weapon), Bloodstorm (can alter the composition of blood, both his own and that of others) and The Eye (a powerful telepath and intermittent clairvoyant) 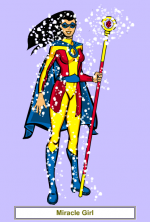 Miracle Girl (Qız Ğajap) is a younger sibling or demi-human offshoot (it is unclear as to precisely which) of the same alien race as Miracle Man. She does not have the lightning power of Miracle Man, nor his ability to fly. Apparently these abilities are particular to Miracle Man and caused by his defective life pod's transit through Earth's atmosphere. Miracle Girl does carry a crystal-topped staff that gives her the power of teleportation. 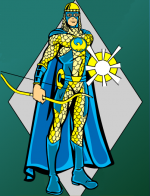 Golden Man (Altun Adam) is a reinvention of the Snorist-era character, minus a lot of the propaganda. Tiger Comics bought the rights to the character from the defunct Timely Turkestan in 2006, and have "reinvented the character for the post-EBÜK world". See the individual article here for full details.