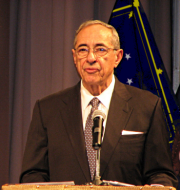 Matthew Mario Cuomo (b. 1932 d. 2015) was the former Lord Governor of Castreleon New and former Kemrese Viceroy for the North American League. Born in the Llo Rhiant burough of New Amsterdam and the son of an immigrant from the Two Sicilies, he was a well-known Cricket player following his graduation from college.

Cuomo was first elected governor in 1978 and reelected several times. A popular Lord Governor, he was considered a possible choice to replace Ben Nighthorse Campbell as the Whig candidate for General Moderator in 1991. After months of ambiguous public statements on the subject, he formally announced in late February of that year that he would not seek the General Moderatorship, and announced his retirement from politics in 1993. However, many commentators at the time speculated that he was holding out for an appointment to the Viceregal College-- a speculation that came true in 1995 when he replaced Kemrese Viceroy Albert Gore, Sr.

As a Viceroy Cuomo has been noted for his strong opposition to the death penalty. He was one of the few voices urging Mejico to grant clemency to captured Tejan dictator Jorje Bush, a view that drew much criticism in Mejico, Tejas, and the NAL.

On November 5, 2007, Cuomo replaced Bruce Stanfield as First Viceroy of the NAL-SLC.

As Kemrese Viceroy, Mr. Cuomo is entitled to be addressed either as His Excellency the Right Honorable Viceroy (or Most Honorable First Viceroy) or as Warraghiyagey, the Kemrese Viceroy's honorary name in the Iroquois language.

On New Years 2015, Cuomo died of a heart condition hours after his daughter Andrea Cuomo was re-elected as Lord Governor of Castreleon New.