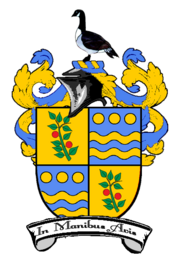 The Bush Family can trace its roots to the Mayflower in the Americas, but until the late 1800's were simply one of the New England gentry. It was under the watchful control of the Robert Bush that the family rose to the fore, and it was his son, Prescott Samuel Bush (named after Robert Bush's brother who had died in childhood of diptheria) who would guide the Bush family fortunes to such a point as to enable George H. Bush, his son to lead one of the most politically active families in Western society.

The Bush family coat of arms can be seen on the ancestral home at Point Walker, Massachussets Bay, named for the Walkers, another wealthy branch of the Bush family tree. Its description is as follows: Quartered; first and fourth Or, a cranberry sprig fructed gules of leaves vert [Bush]; second and third azure two bars wavy Or, three bezants in chief [Walker]. The crest is a New England goose, with the punning motto In manibus avis, "a bird in the hand".

George H. Bush, an American transport and oil baron from Massacheusetts married Barbara Preston of New Castreleon. They have six children, the elder two, George and James, were born in Tejas while the younger four were born in Massacheusetts where the Bushes maintain a homeplace. 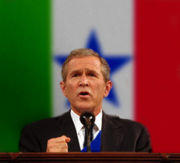 Tejas has had a storied and checkered past history. After colonial times, it was variously a kingdom, military dictatorship and democratic republic. After the depression of the 50s (once GWII ended, Tejas failed to change its industry and persue suitable postwar endeavours), Tejas sank into civil turmoil from which emerged several short lived military junta dictatorships.

During GWII, a part of the Bush family, who were famous in the NAL as developers of oil and helium reserves around the world, migrated to Tejas in order to establish natural resources firms in that country. Tejas having a share of both oil and helium, it naturally interested the Bushes and so, like the Oncelers, they sent off a contingent to see what could be done with Tejas. Being wealthy, they naturally had connexions and emigrated with an entourage of loyal associates. Throughout the 60s and 70s, the elder George (Jorge) Bush was very much involved in the evolution of Tejas in those decades.

In 1988, the younger Bush, a major or colonel in the Army, rather burst on the scene and staged a military coup. At first the elder Bush was dismayed (in his memoirs, he stated that such a move "wouldn't be prudent" as the political state of Tejas was "such a greasy mess"). Several months of topsy-turviness were actually quite skillfully navigated by the younger Bush.

At first, his rule was firm but fair (typical benign dictator). As he turned Tejas into a fairly successful country, his own appetites became more expensive and expansive. His motives soon became less than noble as troubles began to brew anew with Alta California. He found himself ever on the brink of war and had to gear his economy towards that sector, to the ultimate detriment of the country.

One thing led to another and soon enough any civil liberties left to the people were entirely removed and the whole country was prepared for the Big War with A-C. But as history demonstrated, Tejas couldn't afford both the War and Bush's tastes in fine art and similar.

In 2000, Bush senior became fed up with the state of affairs in Tejas and pulled out of the country. This left quite a ding in the production capacity of the remaining industry and is undoubtedly a contributing factor to Tejas's downward spiral vis-a-vis A-C. Jorge was captured and later executed by a military court in Méjico (2004). Her Majesty the Queen of Tejas is courting the elder Bush to once again enter Tejas and invigorate the country's industrial capacity. As of late 2004, these talks are progressing apace and it seems likely that Bush's energies will once again focus on Tejas.

Jaime's story is also quite interesting. He left Tejas for Florida to seek his fortune in business there. Curiously, his connections led to a run for the House and then the Cortes. He discovered that politics was his true calling and ran on a reform ticket in 2000 after the death of Villa-Lobos, but lost to the popular Andersen-Matamoros. The latter, who was simply filling out Villa-Lobos's term originally scheduled to end in 2002; she dropped the ball however in failing to solidify Florida's position as hegemon and Top Nation of the region. Bush ran again on a pro Florida (Destino Castellano) platform, but was still a reformer at heart. Though a "foreigner" he had become more Antilean than any native Antilean and also actually beleived in the rightness of Florida's place in the world and the means needed to achieve that place.

History has demonstrated fairly clearly that he can conduct his nation's affairs with both steel and soft velveteen gloves. When it comes to Floridian integrity and place, he will not back away and will fight to the last. However, he is a serious reformer in a corrupt land, and has shown to be quite pro-Cruzans at almost every turn.

Unfortunately, in the opinion of many especially northern Floridians, Jaime was deposed in a coup by General Silva and has disappeared and is presumed dead. As of November 2004, a leak reported that Jaime Bush was captured by American forces and is located at a secure installation within the NAL. Other rumours include Bush being held by the Oregonians pending trial. In late 2004, it was discovered that Bush often used well trained "body doubles" to appear in certain tight spots, public appearances where it would be imprudent to send the real Presidente. American papers are claiming that Oregon has a body double, but are clamouring for some kind of report from the GM's office. The American government remain alarmingly close lipped about the status of Mr Bush, but continue to quietly claim that he is secured within the NAL. Rumours abound in the streets of Philadelphia that the Minister of Defense himself will soon travel to Oregon to negotiate the extradiction or release of the Mr Bush held in that country.

In 2005, it was recognised that Oregon had indeed secured the real Mr Bush. Negotiations regarding his testimony before the American parliament were hampered for many moths as lawyers on both sides of the Western Mountains wrangled over various issues including what country or countries Mr Bush is actually a citizen of. The issues were settled well enough in 2006 for Mr Bush to travel to Philadelphia to testify before the Convention. His testimony, mostly surrounding the Watergap Scandal and several other issues surrounding his presidency of Florida-Caribbea and the war that brought that country to an end, was given in a closed session and the results were published in December of 2007.

In 2006 it was revealed that the RTC claim to have the real Bush, however they have not yet presented any evidence to support this claim.

In 2007, the NAL and Oregon agreed to a concord that recognises Mr Bush's citizenship in both countries; Mr Bush is set to be tried in Oregon for misconduct during the Florida War. He is set to return to Oregon in December of 2007 or early January of 2008.

Having been involved in several investment banking corporations since the 1980s, chief of which was the famous Silver Acres Loan Association scandal, Nelson Bush has turned his attentions to the overseas investment market. His firm was involved in recent Japanese and Hong Kong investments in Louisianne; and has also played a key role in gaining Australasian investment in Japan and Corea. Currently is seeking investors to provide capital to fledgeling Tejan manufacturing and transport firms. Resides in Hong Kong.

An American media and computer networking executive. Resides in Virginia.